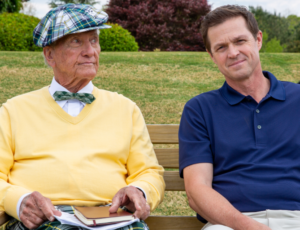 There are several different stories from which the golf-term “mulligan” originated. The one Michael O. Sajbel’s movie The Mulligan cites is the time Canadian golfer David B. Mulligan allegedly elected to replay a stroke due to his demeanor being thrown off after a rough ride over the Victoria Bridge on the way to the Wing Foot Golf Course. Whatever the use, it’s a common term for a “do-over,” be it in the game of golf or, more broadly, life.

It’s a shame we can’t get a mulligan on the movie The Mulligan, although that would require an extensive overhaul of pretty much everything. Save for a charismatic Pat Boone (still glowing at age 87) and some attractive photography, this is a drearily simplistic, run-of-the-mill piece of proselytizing tailormade to impress its target audience, if that. It’s set in some fictitious world where naughty words don’t exist, an old-timer spends his remaining days overlooking a verandah waiting for a lost soul to tap him on the shoulder, and CEOs of multi-million dollar enterprises eventually have the heart to implore their employees to take more vacation time.

The CEO is Paul McAlister (Eric Close, American Sniper), who runs a very successful company that’s work is never clearly specified. He crosses paths with a man known as “Old Pro” (Boone) after his tardy arrival to a charity golf outing results in him making a fool of himself — culminating with him snapping a putter in half. At first, Paul assumes the Old Pro is going to coach him at his golf game. But being that this is a Christian movie, the old man can tell that Paul would be better served by some coaching at the game of life.

Paul is separated from his wife (Tanya Christiansen) and hasn’t seen his son Jake (Andrew Brodeur) in ages. That changes when Jake, a motorbike rider, is spared death after a bad accident during a race. His wife forces Paul to care for Jake during his recovery. This provides an opportunity for Paul to remember what really matters in life, which absolutely tickles the Old Pro. Meanwhile, while Paul is busy finding God and rekindling his relationship with his son, his CRO is busy screwing him over on a deal that would give the company serious presence in Asia. To do what besides “build relationships” and turn a profit? Who can say?

The film is based on a book by Ken Blanchard and Wally Armstrong and simultaneously brought to us by PING Golf, Titleist, and Arnold Palmer Half & Half, all of which contributed enough dough to get their logos unsubtly plastered on the screen. After his horrific game, Paul turns down a mint julep from the Old Pro in favor of an ice-cold Arizona tea. Have you ever known a golfer — especially after a bad game — to turn down a stiff libation?

The Mulligan has greater problems, sure, but such moments provide unintentional comic relief while momentarily making you forget the larger issues. It takes two of the most boring things on Earth — golf and obvious life lessons billed as revelations — and blends them into a movie that aims to be inspiring while providing us with nothing remotely compelling. If you can’t see that Paul will have his “come to Jesus” moment, reunite with his wife, build back trust with his son (whose story-arc starts and then is pretty much completely abandoned by the second half), and learn that family triumphs over everything, then there’s a good chance this will be your first time seeing a movie.

I’ve seen plenty of faith-based movies to know that dimensional storytelling is far from their specialty. However, this kind of pablum is most likely forgotten even by its devoted group of viewers. It’s not nearly as harmful as something as odious as God’s Not Dead: We the People, but I’ll be blunt in saying it’s far less interesting to write about too, much less watch.

One more thing: The Mulligan was written by four writers, three of whom brothers and one of them behind The Trump Prophecy. The man, Rick Eldridge, is also the owner of Reelworks Studios, the distribution company behind this film. Draw your own conclusions there.

NOTE: The Mulligan is playing as a Fathom Event in select AMC Theaters on April 18th and 19th. Presumably, a VOD release will follow soon after.