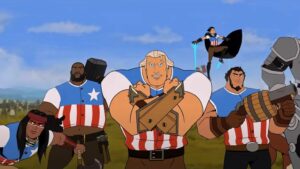 Ostensibly brought to you by the same jokesters who peddle such frat-boy-centric T-shirts billing the Founding Fathers as “George Sloshington” and “Ben Drankin,” America: The Motion Picture begins with a beer pong tournament amongst those very men. The intro to the Constitution is on the line, and it’s John Hancock who sinks the final ball, making his choice of phrasing, “We the People,” the winner. Thomas Jefferson’s suggestion? “Us rich white guys.” Hancock proceeds to sign the document. Right off the bat, America can’t decide whether it’s making a joke of the Constitution or the Declaration of Independence.

Give director Matt Thompson’s directorial debut credit. Him and screenwriter David Callaham (Mortal Kombat) throw everything against the wall in hopes of getting a laugh. Thompson is an executive producer of the long-running adult cartoon Archer and previously helped spearhead cult-favorite shows such as Frisky Dingo and Sealab 2021. You wish some of his satirical prowess transferred to a film that’s essentially an extended special of the show Drunk History — or better yet, a random assortment of Adult Swim shorts that would’ve functioned better as such.

The film conjoins various points of history, imagining historical figures of different eras to be friends with one another while working towards the formation of the United States. Channing Tatum, who also serves as producer, loans his voice to George Washington, who is best friends with Abraham Lincoln (Will Forte). Both Washington and Abe are out at Ford’s Theatre one night watching the Red, White, and Blue Man Group perform when Abe is murdered by Benedict Arnold (Andy Samberg), who is both a traitor and a werewolf. Abe’s dying wish is for Washington to free the colonies.

George sets out to assemble a team of heroes to stop Arnold and King James’ regime. He finds his right-hand-man in Samuel Adams (Jason Mantzoukas), a beer-guzzling party animal, Paul Revere (Bobby Moynihan), a champion horse “racist,” and Thomas Edison (Olivia Munn), who subverts everyone’s expectations as she is a Chinese woman.

Where Archer can occasionally get too invested in its crudity — unassisted by the sheer fact that it’s run its course after 11 seasons — it often has a distinct comic vision or at least a satirical edge that’s absent from America: The Motion Picture. Characters knowing how to apply complex mathematical concepts and utilize cassette tapes despite being completely unaware of how to operate a motor vehicle further enhance the lack of a method behind the madness. While certain side-gags such as “John Wilkes Merch Booth” provoke a chuckle, such humor is not sustained over a downright taxing 100 minutes.

The sad fact is America: The Motion Picture, unlike most bad movies, eventually finds (or stumbles upon) the right rhythm during its climax. Washington’s choice of a National Anthem prompts a terrific song-sequence, and the American Revolution is set to “(You Gotta) Fight for Your Right (To Party!)” Dare I say, its final minute recalls the ‘Murica-loving idiocy that propelled Team America: World Police to be the great film that it was in 2004 and remains to this day? Thompson and Callaham strive for the satirical bite of Parker/Stone, but instead get wrapped up in the kind of humor that appeals to the Adult Swim crowd when they’re five beers/bong-hits deep and it’s way past their bedtimes.

NOTE: America: The Motion Picture is now streaming on Netflix.