Summer of Soul (…Or, When the Revolution Could Not Be Televised) review (2021) 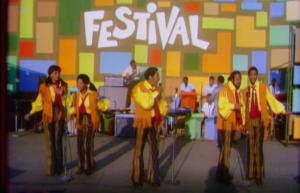 Knowing whether or not you’ll like Summer of Soul (…Or, When the Revolution Could Not Be Televised) is as simple as searching the lineup for the 1969 Harlem Cultural Festival. If names like The 5th Dimension, Gladys Knight & the Pips, Stevie Wonder, Mahalia Jackson, and Nina Simone don’t excite you, I’m not sure we can be friends.

The only thing more incredible than the wealth of footage from the festival itself is the fact it sat in a basement unutilized and forgotten for five decades. Producer Hal Tulchin had filmed the concert in its entirety, but no network saw any interest in airing it. Bless Ahmir “Questlove” Thompson (joint frontman of the hip-hop group The Roots) and the filmmakers for not only restoring the footage in glorious color, but also assembling it into an artful, compelling documentary — as beautiful as it is coherent.

Last Fourth of July, we were stuck in our homes with Hamilton has our main source of celebration. This year, as town-fests, concerts, and other fun events return, we can arrive home and keep the party going with this jubilant celebration of music and character.

About the 1969 Harlem Cultural Festival: it took place in Mount Morris Park in the heart of New York’s Harlem neighborhood. It drew some 300,000 people the very same summer the hippies would flock to upstate New York for Woodstock. The charismatic Tony Lawrence served as the emcee, donning slick suits and even a sombrero as he exhausted himself to energize the massive crowds.

The context is just as important as the actual event. Woodstock would happen the same year and get all the media coverage. John F. Kennedy and Malcolm X had been dead for years, yet remained in the collective minds of a country; Martin Luther King, Jr. was killed not even a year prior to the festival. Oh, and the United States found its way to the moon too. One of the most significant scenes in the documentary is the juxtaposed footage of the American populous’ reaction to Neil Armstrong stepping foot onto the moon to that of festivalgoers. The Harlem crowd couldn’t care less. This was their celebration. It was where they felt they belonged and their voices were finally amplified.

“Nobody ever heard of the Harlem Cultural Festival,” says one festival attendee early into the documentary. “Nobody would believe it.” That they wouldn’t. Woodstock was well-documented and obsessively archived to the point that it has engrained itself in the history of America. The Harlem Cultural Festival, like many milestones in Black American history, was nearly subject to complete erasure. An important element Questlove includes in Summer of Soul is the reactions from not only performers but people who were there to witness it. Tears are shed. Disbelief is palpable. These moments show the impact of film as a whole. Something that was merely a memory is now archived until the end of time.

The festival did a lot for the oft-battered and shunned community of Harlem, but it did a lot for the performers as well. The 5th Dimension, for instance, got to face the Black community after being subjected to harsh criticism that their vocal harmonies sounded “too white.” “How do you color a sound?,” asks the still-radiant Marilyn McCoo. The 5th Dimension absolutely crushes “Aquarius/Let the Sunshine In,” which became one of the biggest songs of ’69. A bulk of the doc’s midsection is devoted to intertwining blues and gospel sounds, culminating with Mahalia Jackson and Mavis Staples’ performing “Precious Lord, Take My Hand.” Being Dr. King’s favorite hymns, with the wounds still raw from his assassination, the word “powerful” doesn’t do the performance justice. Inject Mahalia’s boundless vocal range into my veins.

Capping off nearly two hours of history is Nina Simone, who gives a performance that’s a mix of sorrow, rage, and pride. When she sings “To Be Young, Gifted, and Black,” the crowd looks on with a plethora of emotions not easily classified. By this point, the music and politics of the festival are inextricably linked, further magnified during her performance of “Are You Ready?,” which calls for a revolution. The explosion of emotion is a compliment to a fest that blended sounds of pop, jazz, soul, blues, and gospel so seamlessly.

If there’s one petty gripe, it’s that Summer of Soul does feel maybe 10-15 minutes too long. Its devotion to showing performances in its entirety may subject it to background noise for viewers because of that. Yet it’s difficult to harp on that complaint given the fact that this is the first time the masses will be able to witness such a fervent display of pride that was mostly left to the unwritten recesses of history. Seeing a release during a summer worthy of celebration (which was preceded by a summer of gloom), Summer of Soul is not merely one of the best documentaries of the year but one of the best films of the year as well.

NOTE: Summer of Soul is now playing in select theaters and is streaming on Hulu.