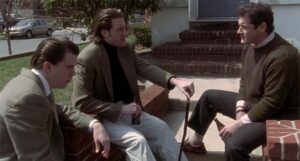 Edward Burns’ The Brothers McMullen was the little indie dramedy that could. Written by Burns while working as a production assistant for Entertainment Tonight in 1993, it was shot over a few weekends on a shoestring budget ($24,000). Burns slipped a copy to Robert Redford while he was on-set for Entertainment Tonight, and Redford would help the film secure a place at Sundance in 1995. The subsequent distribution deal with Fox Searchlight netted the film an extra $200,000 for post-production cleanup and the rights to Sarah McLachlin’s tearjerker “I Will Remember You,” which is played during the end credits and every missing persons montage ever.

In the present, Burns as solidified himself as a recognizable “that guy” actor in films like Saving Private Ryan. Those who have dug deeper and found his directorial catalog know him as an ever-reliable dramatist with Woody Allen sensibilities embedded in his process. The Brothers McMullen is a real darling of a movie as it observes the life of three brothers trying to remain morally astute in their relationships despite not always making the best decision.

Jack (Jack Mulcahy) is the elder brother, in his early 30s and married to the lovely Molly (Connie Britton) while teaching English at a nearby university. There’s middle-brother Barry (Burns), who is at the opening family gathering with his soon-to-be-ex-girlfriend Ann (Elizabeth P. McKay). Then there’s Patrick (Matt McGlone), in his mid-20s, seeing a Jewish girl named Susan (Shari Albert).

Burns divides his time rather evenly between the brothers with their charms and foibles rising to the surface slowly but surely. An important note is how these brothers were all raised as Catholics and come from a shaky homelife. The opening scene shows the boys’ mother at their father’s funeral — who is later referred to as “our favorite wife-beating, child abusing alcoholic” by one of the brothers — informing Barry that she is packing up and heading to Ireland finally to live with the man of her dreams. The brothers have seen a troubled relationship up-close, where the line between falling in love with someone and doing the morally righteous thing was blurred. This adds pressure to their current relationships.

Jack is happily married. He wouldn’t think of hurting Molly. Yet, he can’t resist the blatant passes from Ann after her breakup with Barry. The two have an affair, although there is usually pleasure from both parties in that particular situation. The affair only appears to compound Jack’s early onset midlife crisis and makes him miserable. Meanwhile, Barry meets a young, starving actress named Audry (Maxine Bahns) and likes her. Then he loves her. But he’s not ready for commitment. Audry has commitment issues of her own, with a husband back in Virginia while she looks for work in New York. Or is he her fiancée? Audry isn’t even sure the more time she spends with Barry.

Finally, Patrick is the most outwardly religious of the brothers. He looks to have it made with Susan, who is all ready to get an apartment with him while her father nets him a cushy sales job. But he’s not sure he wants that life. After all, cohabitating prior to marriage is a sin. Susan dumps him because of his wishy-washiness and he reconnects with an old high school friend (Jennifer Jostyn), whose impulsiveness is attractive. Yet he still can’t shake Susan.

Burns lets these relationships breathe through dialog. As someone who became acquainted with his later works prior to The Brothers McMullen, it’s evident that he’s made a habit out of avoiding the emotional climax early on. One of the film’s best scenes is when Molly squarely confronts Jack about his infidelity. Molly is too smart not to know what’s going on, as Jack grows more reserved in day-to-day life. Burns doesn’t take his characters for fools. As much as people want to write off the McMullen brothers as emblematic of toxic masculinity, one cannot deny the humanistic strokes with which Burns paints them. The reality is that people are usually layered and flawed in some respects. The Brothers McMullen reminds us of these facts of life, even as it shows characters doing the best they can in any given moment. Like us too, they must live with the ensuing consequences.