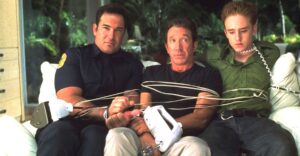 It’s more than a little shocking to think a film starring the likes of Tim Allen, Rene Russo, Stanley Tucci, Jason Lee, Zooey Deschanel, Ben Foster, Patrick Warburton, and Omar Epps among a litany of other names went on to become not merely a box office bomb but a project almost entirely forgotten. I myself hadn’t heard of it until the terrific film distributor Kino Lorber had an extensive sale on their website. I spend way too much time on the internet not to be made aware of such things.

The film is Big Trouble. It was one of several films negatively impacted by the events of September 11th, with a release planned September 21st, 2001. Significantly less shocking a studio couldn’t bring themselves to release a film that climaxes with a gaggle of terrorists bringing a nuclear bomb aboard a passenger aircraft after such calamity. The film was instead shelved until April the following year, and released with little-to-no promotion whatsoever. I’m not even sure I’ve come across it on cable in the last ten years.

Tis pity because the ignominy bestowed upon what is ultimately a zippy little screwball comedy would’ve been better served for another 9/11-era flick such as Zoolander. To describe the plot, however, would take the remainder of the review. Big Trouble is one of those films where describing the characters reveals the plot. Here goes nothing.

Based on a Dave Barry novel of the same name, the film is narrated by Puggy (Lee), a homeless man who uproots to sunny Florida just in time to get mixed up in some shenanigans. Things come to a head early at the home of the wealthy mogul Arthur Herk (Tucci), who owes money to the wrong people and wants to purchase a massive bomb. His wife is Anna (Russo), who can’t bring herself to remember why she shacked up with him in the first place — their daughter Jenny (Deschanel) is shrouded in malaise. Meanwhile, Eliot Arnold (Allen) loses his gig as a two-time Pulitzer Prize-winning columnist for the Miami Herald. His son, Matt (Foster), has to squirt Jenny with a water-gun as part of a schoolwide game. Dennis Farina and Jack Kehler play two assassins assigned to kill Herk and happen to stakeout the same night Matt and his pal (DJ Qualls) try to squirt Jenny. Janeane Garofalo and Patrick Warburton are two cops that arrive at Herk’s home after shots are fired. Lars Arenta-Hansen and Daniel London come to Herk’s services with a nuclear bomb. Later, Omar Epps and Heavy D show up as FBI agents hot on the bomb-dealer’s trail. Oh, don’t forget Tom Sizemore and Johnny Knoxville as two low-rent robbers who hold-up a bar where Herk meets the dealers. Sofía Vergara fits in here somewhere too; she’s the Herks’ housemaid who is on the receiving end of some foot-play from Arthur.

It’s madness, I tell you. Big Trouble isn’t one to waste time. It’s a lean 80 minutes of wacky comedy that has screenwriters Robert Ramsey and Matthew Stone breathlessly trying to keep up with Barry’s propensity to introduce new characters and tie them in with the relentlessly forward-moving “narrative.” It’d be intriguing to see how this story played on the pages. It feels like a work distinctly made for the screen.

I give it my iffy two-and-a-half star rating because it does feel airy. There’s no wraparound moral that gives the project weight. There’s also a lot of building to a foreseeable climax. By that point, the film has relied so much on convenient timing that the surprise-factor feels greatly limited. Consider how most episodes of a show like Curb Your Enthusiasm open on a note that winds up being so-distant-yet-so-close to the finale that you almost have to timeline the events in your head. You do that because you admire the ingenuity behind it. That’s where Big Trouble lacks, but it’s a welcomed burst of energy for those nights you demand something light.

NOTE: Big Trouble is available to rent on several streaming platforms for merely a couple dollars.