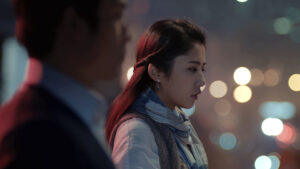 Michael Wong’s The Story of 90 Coins solidifies the filmmaker as a keen visualist above all. His framing techniques are lovely. His images delicately curated to produce stills that feel as crystal-clear as magazine photos.

The aesthetics carry a story that’s pure melodrama as it involves a young couple. She’s a fashion designer (Zhuang Zhiqi), unsure if she wants to commit to her long-term boyfriend (Dongjun Han). He devises a plan to gift her a coin every day for 90 days. If by the end of the 90 days, she still doesn’t want to marry him, they will spend the accumulated coins on drinks and toast to mutual success before they depart for good. If she wants to remain together, they’ll put the money towards a marriage certificate. It’s the kind of cuteness that you wish would happen in real-life far more than it actually does.

The problem is she starts seeing another man (Jose Acosta) and reneges on her promise. It’s then we notice that her clothes begin to reflect the story’s change in mood. She wears white initially. Then she wears black. This further emphasizes Wong’s exquisite attention-to-detail.

Apparently based on true events, The Story of 90 Coins gets maudlin with its handling of emotions. Much of the dialog is conducted through voiceover, which works in large part — better than some of the early interpersonal banter, which doesn’t always reflect how real people speak in casual conversation.

The Story of 90 Coins is a parable on hope and the promise of love, and a solid one at that. Come for the beautiful production design. Try to keep hope alive that true love exists in the meantime.

You can watch The Story of 90 Coins on Vimeo: