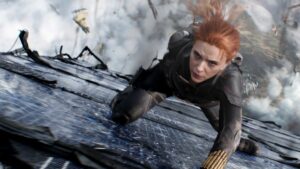 Just when you thought F9 would be this year’s quintessential summer blockbuster about “family,” here comes Black Widow to keep the tradition alive.

Black Widow is at its best when it plays like an old school espionage flick ala Mission: Impossible or James Bond. Such inspiration is hard to deny when a Bond clip can be seen playing on a background TV in one scene. Then again, it’s ostensibly impossible not to have a good film on your hands when your leads are a spirited Scarlett Johansson and a Russian-tongued Florence Pugh. As far as I’m concerned, give Pugh the whole universe going forward.

Black Widow opens in 1995 Ohio where young siblings Natasha and Yelena (played by Johansson and Pugh as adults, respectively) are taken away from their surrogate parents, Alexei (David Harbour) and Melina (Rachel Weisz), upon discovering they’re actually undercover Russian spies. The two girls realize rather brutally they were being prepped all along for an induction into a super soldier program, which would transform two ordinary girls into lean, mean, fighting machines. The two were apparently separated when Natasha murdered Dreykov (Ray Winstone), the head of the program, although that may or may not be the case.

Following the prologue, we’re placed on the timeline of events just after Captain America: Civil War. Natasha is a global fugitive after violating the Sokovia Accords. She receives a package from Yelena, who has discovered a substance that releases the Widows from the chemicals injected inside of them. The package contains the vials of the serum, which leads them to reunite at a safe-house in Budapest. Now they must break Alexei (aka “The Red Guardian,” Russia’s Captain America) out of prison and reunite with Melina.

It was refreshing to see early on that Black Widow tells a simple story effectively, drawing inspiration from a genre that ages like fine-wine, regardless of the decade or what new foreign conflict arises. Predictably, however, the film doesn’t improve Marvel’s villain situation whatsoever. There’s Taskmaster (Olga Kurylenko), whose photographic reflexes allow her to mimic a challenger’s fighting style. It provides for some ingenuous moments of combat, but doesn’t rescue the lacking urgency, as Taskmaster feels woefully underwritten.

As strong as Johansson is, Pugh dominates the film from her first scene. She transforms herself with a wholly believable Russian accent, excellent line delivery, and a flag-planting statement that she’s here to stay in this franchise, with her return coming in Disney+’s upcoming Hawkeye series. Particularly surprising is David Harbour, who functions swimmingly as the token comic relief. He’s one of Marvel’s strongest, I’d say. Harbour has a scowl to Alexei that gives him a degree of ominousness, but he also delivers some of the film’s funniest one-liners. And Weisz rises to the occasion with a clinical coldness as Melina.

Director Cate Shortland (2012’s Lore) captures the action choreography with poise as well. If anything, she’s undercut by some unstable editing, which too often fails to give us a clear sense of placement much less a full-range of motion. It’s a two-handed problem at times, with Shortland’s propensity for close-ups biting her in some of the bigger setpieces. Yet it’s further offset by the rapid-cutting. There must be an unwritten law that studios producing action movies these days are subject to a fine if a particularly combat scene lasts longer than three seconds. It’s disorienting at times, however, it’s not like it’s a new issue.

The 24th film in Marvel’s ever-expanding Cinematic Universe (not including the arsenal of TV shows), Black Widow is an inevitably ironic start to Phase Four given Natasha has met her fate. I could rant about how Marvel should’ve gotten on a Black Widow movie sooner. I could say had they done it, perhaps the incessant internet arguments regarding “female superhero movies” wouldn’t be such a hair-trigger debate amongst folks with too much time on their hands. No less, I relish in my own fatigue of the genre and am simply grateful that I’m writing a good review of Black Widow. Because it deserves it.

NOTE: Black Widow is now in theaters and streaming on Disney+ Premier Access for a limited time.