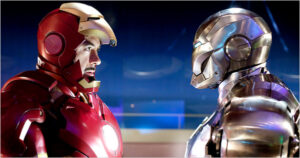 Despite the fact that Tony Stark (Robert Downey Jr.) is such an egotistical, relentlessly uncompromising man, he can’t help but earn one’s sympathy in Iron Man 2, the sequel to the overwhelming success that was Iron Man. Stark must deal with a Russian physicist named Ivan Vanko (Mickey Rourke), who believes that he stole the complicated plans for his own personal Iron Man-technology from his father, his other arch-rival Justin Hammer (Sam Rockwell) who is establishing an gigantic uprising of metal monstrosities, and Congressional jurisdiction attempting to make Iron Man property of the Defense Department rather than his own personal technology. Talk about Atlas shrugging. On top of this, his company is now run by his longtime assistant Pepper Potts (Gwyneth Paltrow) and his best-friend Rhodey (now played by Don Cheadle) may now become his sidekick to stop Vanko.

Iron Man 2 is probably the most kinetic, fast-moving, briskly-paced sequel that could’ve been made to such a surprisingly elegant, intriguing film. Initially, with all this stuff going on, this sequel looked like it was going to follow the messiness and unfocused nature of Spider-Man 3, but director Jon Favreau manages to, for the most part, keep things moving steadily.

I begin by reiterating the main element I praised in the original film and that is Downey’s wonderful, wholly spirited performance as one of the most narcissistic males to take the screen in years. Stark is a tricky character to play, on one hand being a generous philanthropist and an uncompromising genius with a love for chemistry and science, but on the other, being hopelessly cocky and basking in the light of his own self-centered arrogance. How does one make a character like that watchable, let alone likable? Downey Jr. somehow pulls it off, using tactile energy and quick-witted humor as a means to convey a character we simply enjoy watching.

Another fascination I have with Stark is his ability to be and remain public about his abilities as Iron Man. Most heroes prefer reclusion, resorting to closeting their abilities by acting as if they are darker, more elusive alter-egos. It’s at least fascinating that Stark doesn’t play by these old constraints and chooses to be as open about his alternate persona as a person who just took up a new job.

With that said, there is more of a focus on Stark as a human rather than Stark accompanied by a large, straining iron suit. This way, his problems appear more humanly to us (not wanting to give up something that is rightfully his, trying to establish peace amongst large groups, etc) and his agony feels more close to home. If there is an unfortunate element to be found in Iron Man 2, it’s that the focus too often shifts and there are really too many things going on here for them all to be truly explored in one-hundred and twenty-four minutes. This isn’t as half-baked as it could’ve been, but it’s not as deeply involving or as nourishing as it should have been either. And just when you think the ideas have all shown themselves, out pops Nick Fury (Samuel L. Jackson), leader of the organization S.H.I.E.L.D, to inform Stark about his father and how he could be valued in the organization. And just when you think that’s the final plotpoint, a twist features Scarlett Johansson’s Natalie as someone that is more than just Stark’s latest piece of eye candy.

The idea of Stark refusing to surrender over his technology and advancements to the Defense Department alone could’ve made for an unbelievably interesting story about staying true to one’s inner-self and holding on to what is rightfully yours, regardless of price or negotiations. However, could you see that being the main point of a superhero film? Neither could I; too many bad guys and too little time.

Iron Man 2 is at least an ambitious sequel, looking to tackle a wide-range of ideas and central conflicts had by its title character. The problem is it takes enough plot from a potential Iron Man 3 in its quest for ambitiousness and variety. The action sequences remain fluent and grandiose, the actors all fill their parts nicely (if only Mickey Rourke was given more time to shine), and the sense of fun and excitement is still present. There’s just a sheer listlessness of execution that needed to be discussed when implementing so many wonderful ideas.