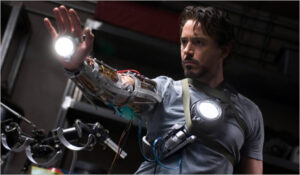 Iron Man is one of the only superheros I can find myself completely loving and admiring, up there only with Peter Parker. Few characters, in my opinions, are as interesting as their superheros, and as far as film-portrayals go, Tony Stark and Peter Parker have been treated with excellence and respect. Christopher Nolan’s Batman series was a monstrous success, but I didn’t find myself caring much for Bruce Wayne as a person. I saw him as more than a shell, but had no real passionate, human connection with him that would seem like a personal relationship. It’s not a fault of Nolan’s filmmaking or actor Christian Bale himself, I just didn’t find much personal investment with Wayne.

Parker and Stark bring a more recognizable, forceful energy to their legacies. Parker’s charming geekiness, naivety, and understandable anguish during his time as Spider-Man provided me with total joy and excitement. In contrast, Stark brings a different energy to the table, a collective, narcissistic one that I usually loathe. And yet Robert Downey Jr. Makes no missteps as playing this kind of cocky, self-indulgent character. He comes off as a force of total energy, making his cockiness actually kind of charming and elegant.

Downey Jr. is a big part at why Jon Favreau’s Iron Man is such a big success. I always look at superhero epics as character studies before special effect showcases, which some may find to be irrelevant and rather expecting of me. The way I see it, if you plan to make a film based on a specific hero, you are required to give back story, character development, insight, and a reason for the viewer to care about him and hope for him to succeed. Favreau does this and more as Iron Man is one of the best superhero films of the new decade, exciting, perilous, uncompromising, and simply a joyous experience.

The film concerns Stark’s rise from astronomically intelligent philanthropist/playboy persona to a crime-fighting, high-flying superman in an enormous, full-body iron-suit. There’s also explicit detail in the relationships of Stark’s life, one being Gwyneth Paltrow’s Pepper Potts, his highly-competent assistant, and Jeff Bridges’ Obadiah Stane, his business partner. There’s an equal balance between character relations and satisfying action, and neither plod along or become unearthly long. Favreau is smart about his placement and vision; Iron Man is shot and conducted on a grandiose scale, uncompromising in its clarity and visually arresting in its imagery. One of the most common things I see in superhero epics is their hunger for enormous sequences and their struggle to achieve that. Here, the film simply doesn’t know how to fail and that’s a huge strength.

Several scenes show the complexity of Stark’s mentally draining process to become Iron Man. Stark’s energy very much comes out here, especially when he’s faced with criticism from people like Pepper and Obadiah. His unfathomable intelligence and cocky exterior makes up for a somewhat present feeling of inferiority. It subtly seems that Stark uses defense mechanisms such as cockiness to make up for feelings that he may not live up to the expectations brought forth by his father.

Yet this is not a pity story or a disposable action film. This is a promising picture, with mesmerizing action sequences, plotpoints that deserve your investment, characters that earn their business to be liked, and a film that deserves a viewing on your part. Iron Man hardly ever missteps; it’s as dynamic and as confident as its title character.