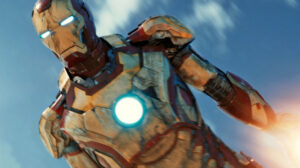 Early on in Iron Man 3‘s lengthy, long-awaited production, director Shane Black stated he wanted to make a film that wasn’t superficial or self-serious, but rather, more fun and lighthearted. I would’ve went with serious; Iron Man 3 is, to say the least, a disappointing conclusion to a franchise that showed amazingly potent promise with its awe-inspiring debut just five years ago. This is a been-there-done-that affair that does exactly what I praised its original film for not doing; serving as a special effects compilation and incorporating much more humor than necessary.

Perhaps that was the foreseeable effect of having Black take the director’s chair over Jon Favreau, who manned the ship on the first two productions. Black, whose fame stemmed from the 2005 cult hit Kiss Kiss Bang Bang, throws way too many cutesy witticisms in his writing, treating the third installment of the Iron Man franchise as the byproduct of a self-referential film treading the likes of Seven Psychopaths. Not only does putting this side-by-side with the original two films, which weren’t as dark or as heavy as Nolan’s Batman franchise but still rather serious, seem a tad out of place, but the series feels like it’s more concerned with nudging and winking at the audience than wrapping things up cleanly.

We are thrown back in the futuristic world of Tony Stark (Robert Downey Jr.), only this time, we start in 1999 at a New Year’s Eve party where scientist Aldrich Killian tries to bring up thoughts and ideas about expanding his company to an cold, uninterested Stark. He is quickly-shifted out of Stark’s mindset, never to be seen again any time soon.

Fast-forward to the present and we see Stark’s battle with the aliens in New York (events from The Avengers) have made him jittery and a frequent victim to panic attacks. Just in time, too, since the elusive terrorist Mandarin (Ben Kingsley) is threatening America’s safety and Killian (Guy Peace) returns to exact revenge on Stark for his narcissism and arrogance. On top of this, he must ensure the safety of his long-suffering Pepper Potts (Gwyneth Paltrow) and continue emphasizing that he will protect the citizens of the United States from uncertain danger.

There is far less going on in the third installment of this series than there was in the second film; whether or this is good or bad, you can be the judge. Black doesn’t play it safe, but he sometimes only slightly opens doors before closing them abruptly, a little bit like what Iron Man 2 did in the face of the government wanting Stark to hand over all his technology to the Defense Department. The ignored idea that we could’ve got a lot out of is when Stark’s pal Rhodey (reprised by Don Cheadle) tries to convince him to refrain from instigating or provoking Mandarin in anyway and saying leave it to the government. That is when Iron Man’s role in social order and political uprising should come into play but sadly never does.

I, too, can’t help but feel that if you were a fan at all of the original Iron Man comic books that if part two let you down part three will considerably let you down. Mandarin is drastically shortchanged as a villain, not given too much backstory and only given certain times to chime and spit villainous cliches. Killian, as well, although the film sort of explains why in a twist ending that I find a tad more disingenuous. Clearly, he is played as some sort of Osama Bin-Laden-esque terrorist, but we know far too little about his motivations and plans. He is evil and wants to take over, case closed.

Another subplot features Ty Simpkins as a young boy named Harley, who connects with Stark on a personal level in certain points in the film. Harley is a well-meaning kid, kind of irritating, but genial and relatively harmless, and often the victim of Stark’s narcissism as are many of his close friends. Harley isn’t a bad character, but he’s an unneeded addition to the story. His story offers little-to-no payoff and, in the end, plays as sort of a little piece that tries too hard to tug at the heartstrings.

It’s honest to say that the Iron Man series has gotten a tad bit worse since its start in 2008 with a very promising film that I consider one of Marvel’s strongest films to date. Its sequel, while crowded with subplots and characters, still found a way to get its energy and heart in the right place and at least tie things up marginally well by the end of the film. The third film features yet another wonderful performance by Downey Jr., a briskly-paced narrative, and interesting little minor inclusions along the way, but gets too caught up in the sense of its own whimsy and personal delight with its humor. At this point, the fans deserve an “Iron Man 4” just for the sole-purpose of optimism that it will be better, more efficient than the two sequels we got.