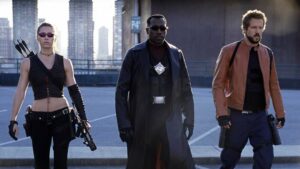 The original Blade gave us a compelling origins story that dealt with vampires and humans clashing and how said conflict would position society to be on the brink of despair. It was slick in its comic-book visuals and managed to write the rulebook of superhero movies before such a book even existed. Blade II looked at the interpersonal conflict amongst different classes of vampires, and while the film was more focused on action setpieces, it had a stylistic master at the helm in Guillermo Del Toro. The story of Blade: Trinity, in so many words, tries to put the nail-in-the-coffin for the potential of vampire supremacy, which sounds like a fitting conclusion to the trilogy. Sadly, inferior side-characters and its clear abandonment of the ethos of the series sinks it like a stone.

Wesley Snipes reprises his role as Blade, and after we see his longtime partner and mentor Whistler (Kris Kristofferson) killed early on, we are introduced to two new sidekicks: the wise-ass Hannibal King (Ryan Reynolds) and the alluring Abigail Whistler (Jessica Biel), the daughter of Blade’s fallen comrade. This time around, the enemy is Dracula (Dominic Purcell) himself, as he’s been awakened by Danica Talos (Parker Posey), who has figured out a way to survive in sunlight. Blade, King, and Abigail are in the process of creating a bioweapon known as “Daystar,” which, if effective, will wipe out vampires at the genetic level, rendering them extinct in due time if a natural blood source is obtained. The blood source they are seeking? It comes from Dracula.

Blade unfortunately feels like a side-character in his own movie. Writer David S. Goyer now performs double-duty as director, and one of his biggest mistakes from the jump is divorcing both Blade and Whistler from the center of the film and instead elevating flimsy supporting players to compensate. Abigail never comes close to having the same presence as her father, and in due time, you come to realize she’s present for sex appeal and little else. Hannibal King is nothing but a vessel to recite cocky dialog and dick-jokes. The schtick proves exhausting in no time. However, it’s possible that Stan Lee kept Reynolds in mind for the eventual Deadpool film as Reynolds shows promise for a character of that caliber more than a decade ahead of time. Alas, his excessive comic-relief doesn’t work for a series that’s predicated itself on the dark and gritty from the jump.

Inviting Dracula into the mythology was another mistake. If this was always going to be the case, Goyer would’ve been wise to find some way to incorporate him in the previous film, therein better linking Blade II with Blade: Trinity. The film fails to make Dracula, or “Drake,” a credible addition to the story; he needed more development, which doesn’t help when the script (a) sidelines Blade and (b) has the wrong man in Dracula, with Dominic Purcell being undermatched for a villain of that gravitas.

Furthering Blade: Trinity into feeling like a disconnected installment are long-standing reports that Goyer and Snipes did not get along during filming to the point where Snipes allegedly disobeyed Goyer’s direction and refused to communicate with him on multiple occasions. Apparently Post-It notes signed as “Blade” were Snipes’ preferred method of communication. These footnotes are crazy enough to be believed on the basis that Blade: Trinity is a sloppily conceived conclusion to a trilogy that otherwise pioneered contemporary superhero filmmaking. I suppose we’ll always have Stephen Norrington’s debut to remind us what a trailblazer really looks like.