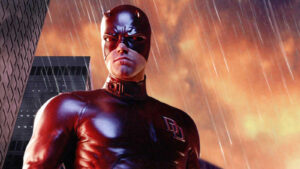 NOTE: This is a review of the director’s cut of Daredevil, which I have been informed countless times is the definitive version of the film. It invites the new subplot of Matt Murdock defending a client in a court case, and apparently ties up loose ends the theatrical cut left open.

Daredevil‘s problem isn’t that its hero is not as well known as some of the other Marvel alumni, but that its plan isn’t a well-developed one. Its first mistake is incorporating actors for their names and not their proper skills. Its second is that the film isn’t sure whether to take the approach of a goofy, imaginative romp or a seriously dark excursion. And third, well, it just isn’t as fun as Marvel’s Spider-Man or even Hellboy, which would come a year later.

Our hero is the title character, played efficiently by Ben Affleck. Affleck’s name alone could’ve turned off anyone at the time because of the constant tabloid exploitation with him and his girlfriend/fiancee Jennifer Lopez, which led to his name being associated with ridicule and mockery (Phantoms anyone?). When he’s not the masked-vigilante, Daredevil is attorney Matt Murdock, who was tragically blinded after a toxic waste accident. This accident corrupted his vision, but exponentially enhanced his four other senses, and sort of giving his vision an odd demotion to only being able to see sonic vibrations.

Matt’s father was, by the book, a bum. A former professional boxer, he lied to his son about working at the biohazard plant, and upon discovering that his father was an enforcer for the local mob, he attempted to run away from home, which is what triggered the accident. His father went back to being a boxer for a brief time afterwards until he was tragically murdered. Matt went on to pursue training in martial arts, and eventually became “Daredevil,” a crime-fighting hero in his hometown of Hell’s Kitchen, Manhattan.

But what superhero film is complete without a villain and a love story? The villain here is Colin Farrell’s Bullseye, a hitman who simply doesn’t want Daredevil to succeed. Bullseye was hired by William Fisk (Michael Clarke Duncan), a rich executive who serves as his right-hand man and a secondary villain. Both of their motivations for evil are inexcusably underwritten.

The love story is corny and a tad distracting. The lady is Elektra Natchios (Jennifer Garner), the daughter of a famous businessman. Mat and her meet at a coffee-shop, where he tries to be polite and get her name. She playfully refuses and leaves. Next thing you know, both Matt and Elektra are fighting on a playground outside like two young children. Needless to say, if the entire film played on that kind of level, scenes like this wouldn’t induce eye-rolling but cheerful grins.

This ignites the film’s major problem and that is it doesn’t know what beat to drum Daredevil‘s song to. It doesn’t know whether to be dark and gritty or campy and fun. The playground fight scene, Colin Farrell’s over-the-top villain, and Jon Favreau’s banter on Affleck say one thing, but the atmosphere, overall tone, and fight scenes say another. There is a miscommunication with direction that is perhaps one of the most fatal to a superhero film I’ve ever seen. The action sequences, on the other hand, are for the most part engaging and fun to watch. Even if the “sonic vibrations” POV becomes a bit distracting, it’s fair to recognize Marvel’s ambition to do something unique and innovative.

Not long ago, Affleck gave an interesting interview about Daredevil, where he stated that it was made right before superhero films became very serious and crafty. It was made in that awkward period where unfamiliar heroes began surfacing (IE: Catwoman, Elektra, Hellboy, The League of Extraordinary Gentlemen, etc) and stylistic intentions began taking over (IE: Sam Raimi’s Spider-Man films and Christopher Nolan’s Batman revival, which would question just what the genre could do a mere two years after this). Watching Daredevil in 2012 is an indescribable experience, especially to those who aren’t a big fan of it. Do we simply not care for the film, or do we not like the film because we’ve been shown the current revolution? The same question could be asked to those who are not fond of classic films of any genre.