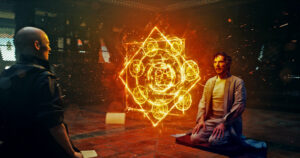 Marvel’s Doctor Strange arrives in multiplexes in a comparable way to Thor in the sense that this is the first time in quite a while Marvel fans are entering the theater expecting something completely different. Rather than a conventional origins story of a superhero or a continuation of their story through a sequel, this time around, there is a heavy layer of subtext involving mysticism, mythology, spiritual intervention, and ancient secrets, in addition to introducing a brand new character.

With that in mind, Doctor Strange succeeds in giving us something different in a pretty entertaining way. It’s not hard to tell that director Scott Derrickson (Sinister) and cinematographer Ben Davis really tried to get this film to look and move differently than any previous Marvel feature before. The film is darker and plays like a cinematic optical illusion with its dizzying special effects, which rank up as some of the year’s best and boldest. But through all the glitz and the conscious efforts of deviating from formula, there is still an inevitable aura of conformity that lurks within the screenplay of Doctor Strange that doesn’t make it bad but doesn’t make it as special.

The film revolves around Stephen Strange (Benedict Cumberbatch), a renowned neurosurgeon who loses the functionality of both his hands following a devastating car accident. Strange tries everything he can to regain control of the nerve-endings in his hands, but pervasive surgeries, rehab, and doctors show no signs of improvement. He is eventually directed to Kamar-Taj, a secret location in Nepal, and uses the last of his financial resources to travel there and meet Ancient One (Tilda Swinton) and a sorcerer named Mordo (Chiwetel Ejiofor). Ancient One informs Strange of her powers, which largely focus on channeling the astral plane and various other multiverses.

A former skeptic of the power of belief until he sees and experiences it before his eyes, Strange becomes dedicated to the idea of traversing different universes and learning of the alleged “Sanctums” that aid in protecting Earth from the intrusion of alternate dimensions. All of this immersion wears on Strange’s ex-lover Christine (Rachel McAdams), who hates to see how far his desperate measures have taken him, especially as he becomes gradually more entranced by the idea of spells and spiritual powers.

It was probably wise of Marvel to lessen the depth and complexity of Doctor Strange’s character and specific world in his introductory film to the world, and for that matter, it’s hard to fault screenwriters Derrickson and C. Robert Cargill (former film critic) for keeping things fairly extractable. But when we see a character like Doctor Strange engage in the same sort of rote battle sequences and fist-fights with his opponents rather than any kind of mind-bending telekinesis or unheard of sorcery, it feels like a cop-out, especially following very intriguing backstory. If future installments find ways to incorporate this, I’ll happily claim my reaction to this aspect of the first film a result of my perpetual lack of patience.

Aside from that admittedly small gripe, Doctor Strange is frequently captivating. Cumberbatch assimilates well to a larger-than-life story, retaining his inherent likability, and never feels outplayed in the face of a powerhouse display of special effects. Again, the film feels like an optical illusion come to life, with mesmerizing sequences of buildings and locales colliding together, forming a hypnotic array of events that simply dazzles. The special effects are not gratuitous, though, and are very conservatively employed by any standards. They play the perfect part in giving you what you want now but leaving much more potential for trickery and magic later on.

Doctor Strange also ranks as one of the best-acted Marvel films, with supporting performances by Swinton and Ejiofor being consistent in their conviction and charm. This is a film that reminds you why Marvel’s future should indeed be focused on developing these second-tier, “Phase Three” characters that not everyone knows. It provides opportunities for people to get a deeper, more well-rounded understanding into the immensity of the Marvel franchise, as well as learn of other superheros and characters that have long been lost in the shuffle, in favor of remakes and sequels featuring characters that we know with stories we can recite on our own. Doctor Strange is the not the first Marvel film to deviate and develop a lesser-known character, but it’s the first to take a sizable leap in a different direction while doing so.

My review of Doctor Strange in the Multiverse of Madness