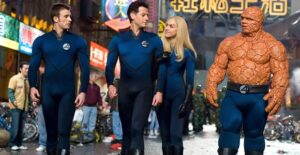 Fantastic Four is one of the last superhero films, that I can recall, that wasn’t insufferably bleak or incredibly serious to a point where any shred of humor was seen as obtuse to the film’s narrative. Yes, Christopher Nolan’s Batman trilogy is an indisputable breakthrough in superhero films, but it also made the seriousness of superhero films standard, something that would follow into the late 2000’s and early 2010’s as Marvel built up The Avengers. Fantastic Four reminds of the quirkiness superhero films were once predicated upon, and while it may get a bit too corny at times, and its focus can never really settle, it’s also a very commercial film that satisfies on some level of entertainment when it gives every card in its deck a fair time to shine.

We open by looking at a physicist named Dr. Reed Richards (Ioan Gruffudd), who is convinced evolution was triggered millions of years ago by stray elements of cosmic energy in space, some of which will pass near Earth very soon. His pal, astronaut Ben Grimm (Michael Chiklis), works by his side on this potentially revolutionary discovery by helping him convince their old classmate Dr. Victor Von Doom (Julian McMahon), the CEO of Von Doom Industries, to allow both of them access to his private space station to further experiment with the effects of these cosmic energy particles. While Doom agrees, he winds up walking away with most of the profits that this experiment will bring, affirming Reed’s desperation to make his project work.

Still, he persists on and brings his close friends Susan Storm (Jessica Alba) and her brother Johnny (Chris Evans) along for the ride. However, when a trip to outer space goes awry, exposure with the cosmic energy results in the four receiving deformities and enhanced human abilities that have never before been seen: Reed possesses the ability to stretch every limb of his body, Susan has the ability to disappear and reappear at her leisure, Johnny can have his body engulfed in flame simply by reciting the phrase “Flame on!,” and Ben turns into a hideous, orange rock monster.

Following the four’s mutations, writers Michael France and Mark Frost focus a great deal of their time on the agony that these mutations bring, particularly The Thing, who experiences his wife leaving him shortly after revealing his deformity. While this agony is a solid angle (one I’d argue necessary in most superhero films), too much of the time is spent profiling The Thing and not enough on the remaining characters of the film. Reed and Ben, who are ultimately the film’s main focus, wind up monopolizing too much of the picture, and any time we see Johnny is when he’s right in the middle of making a smug comment or being his typical, womanizing self.

The action in Fantastic Four has a colorful commercial look to it, brilliantly bold and very vibrant in a way that makes many of the scenes pop with life. It manages to achieve a comic book aesthetic without resorting to picture-in-picture editing. One particularly involving scene takes place on a suspension bridge, where The Thing is seen pummeling everything in his sight and the remaining three members of the team must resort to either relaxing him or protecting drivers and innocent bystanders.

The goofiness in Fantastic Four, however, in an age of dark superhero films that come with slick aesthetics and brooding characters, is a delightful change of pace. Yes, there is a point when one wishes director Tim Story, France, and Frost would command a tighter grip on the seriousness of the writing, but the pulpy fun of Fantastic Four, in addition to the effects and the neatly choreographed action, keep it a moving, satisfying spectacle that is more than just colors flying around on screen, trying to find their place.