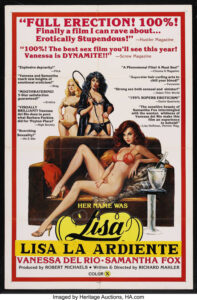 The framework of the story is set at Lisa’s funeral, where the sparse crowd of mourners are largely those who worked with her in the modeling industry. Flashbacks tell the story of each characters’ involvement in her life (and ultimate demise) seconds after they approach her casket.

Let’s talk about Lisa, who is played valiantly by Samantha Fox. She’s working as a low-rent prostitute when she’s discovered by a photographer named Paul (Rick Iverson), who pays her rate simply to inform he’s interested in photographing her. She’s standoffish to him initially, but accepts his invitation. Naturally, the two have sex after the shoot.

“I’m jaded,” she tells Paul as she pops a little white pill and downs it with a drink. She refers to him as “loverboy,” and maintains an icy exterior despite the sex they just shared. Paul believes she has serious potential, and soon enough she meets a publisher named Stephen Sweet (David Pierce). The look of disappointment in Paul’s face when he sees Stephen take a liking to her is palpable. He knows she’s screwed, in so many words.

What sets up to be a lucrative partnership between the two of them is completely ruined when Stephen sets up Lisa to be viciously raped by two of his lackeys. From there, it’s all downhill, as Lisa falls into a warpath of drugs and industry hostility. She finds some solace in the arms of Carmen (Vanessa Del Rio), a mysterious Hispanic woman who appears as if she’s seen it all. But it’s Carmen who introduces Lisa to heroin, compounding her plight.

Contempt and sadness bleed through Her Name was Lisa unlike any film from the Golden Age I’ve yet to see. Even the sex-scenes are shot with a coldness. Director Roger Watkins reportedly had great disdain for the industry at the time; you can feel his anger channeled by his unexciting portrayal of sex. Her Name was Lisa isn’t about the sex, for a good portion of it is rape. Where Watkins loans most of his energy is in the exposition, particularly in the third act when Lisa’s descent into heroin abuse is capped off with a frightening sequence capturing the hallucinations through a fish-eye lens. Carmen’s alluring smile is then made to appear like that of a hungry monster as Lisa writhes in a drugged state. By this point, any arousal we viewers might’ve felt has long wilted.

Just because you know the outcome of Her Name was Lisa doesn’t make it any less unpredictable. There’s a scene involving Pierce’s Stephen in the third act I’m willing to bet you won’t see coming. The remorseful tone is set early, with Watkins’ slowburn narrative allowing us to resonate with Lisa as more than a fixture of our masturbatory fantasies. The soundtrack even finds ways to surprise you, from the inclusion of Carol Douglas’ infectious disco-jam “Let You Come Into My Life” to Exuma’s Caribbean-themed tune “Don’t Let Go” that scores the aforementioned heroin scene.

NOTE: If you’re considering watching Her Name was Lisa, I highly recommend purchasing the Vinegar Syndrome-exclusive Blu-ray edition of the film. It’s features the original 89-minute version of the film and boasts a gorgeous restoration. You can purchase it here.