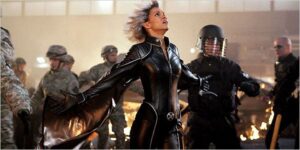 A facility by the name of Worthington Labs has announced that it will now look to suppress the X-gene, the gene that gives their special, superhuman abilities, and is trying to get as many mutants to forgo their special abilities as they can. Any fan of the X-Men knows this will upset the series’ main villain Magneto (Ian McKellen), who works to establish a world where mutants have complete control over traditional humans. This leap in science, however, has concerned Professor X (Patrick Stewart) and his band of X-Men, and this is their cue to investigate. On the case are mainly the clawed anti-hero Wolverine (Hugh Jackman) and the unpredictable Storm (Halle Berry), who work to, once again, stop Magneto and try to convince that humans and mutants can indeed coexist.

X-Men: The Last Stand immediately turned heads for the sole purpose that, for the first time in the franchise’s history, it was not directed by Bryan Singer, who didn’t quite have a third film in mind. Singer left to direct Superman Returns, which was released the same year as The Last Stand. Instead, the studio hired director Brett Ratner, whom was one of the many in talks to direct the first X-Men. Ratner has publicly proclaimed his lack of knowledge when it came to the comic book series, but was optimistic that 20th Century Fox’s writers – Simon Kinberg and Zak Penn – knew enough about what they were doing in order to make a successful and loyal adaptation.

Learning of Ratner’s ignorance of the series fuels one of the more lofty complaints I have about this third installment, and that is the project feels very insincere and lacking in the similar grace and charm of a comic book on screen. What Singer and the film’s writers had built, up until then, was a film that existed in respect to the franchise it was blowing on the big screen, not simply to exist. With Ratner on board, and Singer’s quips nowhere to be found, X-Men: The Last Stand feels like an advertisement for the series.

For one, there is much more action in this particular film than in any other film in the franchise. After watching the gleefully kinetic and wonderfully stylized violence in X2: X-Men United, it’s a shame we have now retraced our steps to incorporate tiresome, listless battles that go on for several minutes at a time, sometimes ten or maybe even fifteen minutes. Because of this, the effect of the series’ enticing setpieces has dwindled from creative and something to anticipate to something that causes little else besides exhaustion. Things explode, characters fall, some of them die, most characters move out of the way just in the nick of time, and so forth.

It’s not that Ratner’s direction and the camera work here is subpar, it’s just there doesn’t seem to be a method to Ratner’s madness here in terms of excessive amounts of special effects and chaotic fight scenes. The nail in the coffin, however, is the writing, which is some of the most atrocious I’ve ever witnessed in a screenplay for a superhero film. Character development and connections are halted greatly when they were expanded throughout the first and second film, characters speak heavily in goofy puns and inexcusably poor jokes, and Wolverine is given speaking lines that leads one to believe the intent was to make him the most unbelievable character in the mix.

What we have with X-Men: The Last Stand are undeniably good special effects, a further, if half baked, expansion on the idea of mutants and how the themes of this franchise potentially reflect society’s discrimination of race, sex, and orientation, direction that clearly lacks the heart of what its predecessor managed to conjure up, and downright awful writing.

While the first two X-Men films were definitely not two of the superhero films I cherished the most, they exercised their ideas and themes of discrimination and individuality to the fullest degree. With that, they took numerous heroes with the common attribute of being physically unique and possessing different powers and a wide range of talents and turned it into a complete two-part film. X-Men: The Last Stand shows what the series would’ve been like had its ideas been shortchanged and action would’ve taken prominence; perhaps it was a necessary miscalculation for us to see how lucky we had it for two films straight.