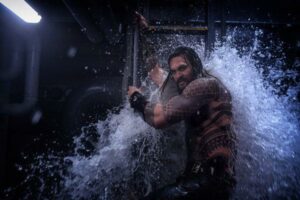 Aquaman proves that part of what was holding the DC Cinematic Universe back for sometime was not only its rushed inception, in order to be a viable competitor to Marvel as swiftly as possible, but the fact that executive suits entrusted director Zack Snyder with some of the universe’s most famous properties. Snyder, who directed Man of Steel, Batman v Superman: Dawn of Justice, and Justice League until that pitiful bomb all but soiled his chances to helm another franchise installment, is now delegated to a supporting producer credit on all future DC films. Like the Jeff Fisher of American cinema — an intermittently impressive but largely disappointing, underachieving workman — Snyder’s absence from two of the biggest and best DC films can’t be overlooked. It’s about time a franchise that has and will continue to play second-banana to the comics empire of the 21st century at least has the gall and wherewithal to allow other promising directors admission into the playground of fertile opportunities that is DC’s intellectual properties.

James Wan’s Aquaman might be hammy, tonally confused at times, and victim to an overstuffed screenplay, but it’s a well-conceived testament to what can be done when DC tones down the glum seriousness and embraces the wryer side of their material. Part Star Wars prequels, part underwater roller-coaster, and part Atlantis Squarepantis, the deep-sea spectacle allows James Wan a vast playing field, while screenwriters David Leslie Johnson-McGoldrick and Will Beall cut through the gloom of the series and implement some changes. Aquaman has long produced eye-rolls for his corny powers and perceived “uselessness” as a hero — never better illustrated than in a cutaway in the Family Guy episode “Baby Not on Board” — which is likely why he’s given a total, muscular makeover in his feature film.

Jason Momoa takes on the titular role as the aquatic hunk. Born Arthur Curry to a lighthouse keeper father (Temuera Morrison) and the Princess of Atlantis, Atlanna (Nicole Kidman), his childhood was rocked when his mother was killed for falling in love with a human and conceiving a child who could co-exist on land and in water. Given the family tree, he should be the King of Atlantis, but that’s a title currently owned by his half-brother Orm (Patrick Wilson), who is using his power to assemble an undersea army in lieu of a war with the land-dwellers. Aquaman teams up with Mera (Amber Heard), a princess who was groomed by his mother to be the Queen, as he must retrieve the famous trident, which serves as the first big step in getting him to assume his rightful position.

Aquaman and Mera traverse the globe: the very bottoms of the sea, the Saharan desert, and even Sicily in order to track down the trident’s coordinates. Also in Aquaman’s corner is Nuidis Vulko (Willem Dafoe), his longtime mentor who trained him to fight and be ready for battle (and there are quite a few of those in the film, mind you). But Orm’s plans take fold when he teams up with Nereus (Dolph Lundgren) as they further mobilize their war-plans as the seas become more and more polluted.

James Wan went from directing horror films like Dead Silence and laying the foundation for Saw and Insidious to being gifted bigger opportunities, like The Conjuring universe and eventually Furious 7. It all culminates in his biggest film and budget yet: a nine-figure blockbuster from a much-maligned franchise that grants him the ability to be as visually imaginative as he desires. Wan is not handicapped by logic and physics here. He controls action and various fish and creatures on a grand-scale in a film that’s vibrant and great to look at, of course also thanks to a legion of special effects artists whose names we may not know but whose crafts will not go unnoticed.

Like so many origins stories where a sequel is anything but a forgone conclusion until the box office receipts come back, Aquaman is all over the place, stuffing two films into one. It eventually loses itself in what should be a simple plot by inviting a litany of characters and intersecting storylines into the mix, not giving them a lot of oxygen to breathe before sending them 20,000 leagues under the Atlantic Ocean. From a contrived romance between Aquaman and Mera, which feels more like a plotpoint then stemming from actual chemistry between the two characters, and an intriguing dynamic between Aquaman’s parents that could’ve been explored more, Aquaman leaves a lot of its chips on the table when faced with the gritty details of its story.

As far as performances go, Momoa lives up to the expectations he set in Justice League as an intensely watchable and likable screen-presence. Dafoe and Kidman bring prestige to an ultimately silly, pulpy movie, though Heard and Wilson could’ve stood for more development to their characters, which might explain why they seem stunted in more dramatic instances. No one feels explicitly out of place, which is a tough statement to make given the unorthodox nature of this story.

James Wan’s Aquaman is impressive and enjoyable despite obvious shortcomings. The change of scenery and change of behind-the-scenes faces is a real blessing not only for a film that had the odds stacked against its quality but for a franchise that now needs more graceful reception as much as it needs to assure that a disaster like Justice League need not happen again.