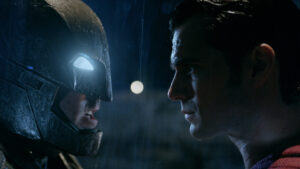 I may indeed be the only one who finds it fascinating that both Batman v Superman: Dawn of Justice and My Big Fat Greek Wedding 2 are released on the same weekend. The former is a heavily hyped film that has the ambition to finally kick off the DC Extended Universe while the universe’s competitor likely doesn’t even see them in its rearview mirror, and the latter is a sequel to a romantic comedy from fourteen years ago. The reason these releases are so germane is that both are highly likely not to leave much of an impact on pop culture, and that even accounts for the original My Big Fat Greek Wedding, which, despite boasting the title of the “highest grossing romantic comedy of all time,” left no footprint either.

I only mention this because the idea of Batman squaring off in an epic battle against Superman, in a time where comic book movies are more popular and some are more subversive than ever, with a nine-figure price-tag is something that should’ve been the battle of the ages. A remarkable duel between two of society’s most beloved heroes that should’ve enthusiastically set up a universe. However, this is a film that will come and go like few superhero films of the last decade, I predict. This is a remarkably bleak letdown of a film, grim to the point of being effectively joyless, bloated and crippled by trying to serve as too many components to the stalled development of a universe, and unexciting while boasting one of the most exciting battles in movie history.

The film takes place eighteen months after the events of Man of Steel, another horribly forgettable picture, where Superman (Henry Cavill) has become a hot topic of debate, so much so that even Bruce Wayne (Ben Affleck) can’t stand the very sight and idea of him after he defeated General Zod, thanks to the onslaught of chaos he brought to Metropolis. Superman, however, cannot stand Batman and works to expose him while continuing to work for “The Daily Planet” newspaper as journalist Clark Kent.

Meanwhile, LexCorp’s new frontman Lex Luthor (Jesse Eisenberg) finds Superman to be the biggest threat facing humanity today and works with Senator June Finch (Holly Hunter) to help him recover Kryptonite in order to defeat the caped vigilante. This would also involve working to replicate the late Zod’s DNA in order to help Lex wage a battle between two of the greatest heroes in history: a battle between man and God.

Much has been made about the casting of Ben Affleck and Batman, and just to get that note out of the way, he’s fine, and does a comparable amount of brooding to Christian Bale’s Batman. Henry Cavill is still a relatively lesser presence mainly because, like Superman in general, his character is very archetypal and predicated upon moral good, two things that don’t go over too well in a new age of superhero films based upon gloom and doom. And that’s exactly what Batman v Superman is, two hours of nonstop gloom and doom that effectively robs the film of any conceivable excitement and momentum one had going into this picture.

The film is unbelievably murky, and unlike with Christopher Nolan’s Batman trilogy, where character interest and relationships were pushed to the forefront with a superhero story existing in the background, this film can’t keep either one straight. There’s too much clutter that makes this film a bloated work of sonic noise and narrative exhaustion, such as the repeated focus on Eisenberg’s convincing but wayward performance of the loose cannon Lex Luthor, in addition to questionable and rather unnecessary emphases on Bruce Wayne’s schizophrenic dream cycle. Both are just perplexing additions to a film where its title could serve as a plot description.

But the biggest problem facing screenwriters Chris Terrio and David S. Goyer is how much weight they have placed on this very film. While trying to serve as a follow-up to Man of Steel, Terrio and Goyer also try to make this film stand on its own while foreshadow the upcoming Justice League film. This means including Wonder Woman (Gal Gadot) in on the chaos in the middle of the third act, as well as highlight Aquaman, Cyborg, and The Flash in cameos, making for a film that’s crippled by a to-do list the lengthy of a grocery shopping list. I’m reminded of how Spider-Man 3 found itself drowning in so many things to include that the only thing left to marvel was the visual scheme.

And even with that, Batman v Superman‘s visual palette is so unattractive it winds up significantly lessening the excitement on-screen. By the time we get to the actual fight between our two titular heroes, a combination of fatigue and the idea that we’ve seen it all before coupled with the gray and black visuals sets in and makes for a film that underwhelms in nearly every sense.

Batman v Superman may indeed be one of the biggest letdowns of the year, save for a nicely handled conclusion and a memorable performance by Eisenberg, who seven months ago was a stoner superhero before becoming a psychotic supervillain. It packs everything we’ve become so accustomed to in superhero films, leaving nothing special for this particular installment, in addition to its grimness breeding contempt and an appalling lack of excitement and its agenda being cluttered to the point of alienation. Chalk up DC as 0-2 going into one of the biggest moves of the brand’s existence.