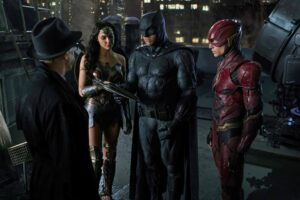 The opening credits of Justice League feature more emotion and heart than anything previously seen in DC’s underwhelming cinematic universe thus far. Preceding it, however, is a prologue that shows a world still distraught by the death of Superman and the subsequent disappearance of heroes and crimefighters. During this time of great vulnerability, the grotesque alien known as Steppenwolf (Ciarán Hinds) and his army of Parademons, who look to collect three Mother Boxes, located in three separate but distinct locations across the globe. If combined, the boxes will engulf the world in a cacophonous, apocalyptic flurry of fire and brimstone.

Following this tidbit of exposition, the opening credits begin and are scored by a languid ballad called “Everybody Knows” by Sigrid. “Everybody knows that the dice are loaded,” it opens with, “Everybody rolls with their fingers crossed. Everybody knows the war is over. Everybody knows the good guys lost.” These melancholic lyrics are enhanced by the corresponding images of impoverished masses, a distraught Lois Lane (Amy Adams), and advanced urban decay, all effects of Superman’s untimely demise. Given the amount of admittedly evident emotional manipulation on-screen, I thought I had stumbled into a showing of the new film Wonder, but at the same time, as fairly obvious as this whole attempt at resonance was, I felt something in regards to a DC movie. Regardless of what happened after that opening, I cannot take that away from this film.

But as expected more-so than feared, that emotion quickly dissolved into a familiar emotion DC films inspires and that’s indifference. Justice League comes equipped with more comic relief and sprinkles of light-heartedness in an attempt to undercut the ubiquitous gloom of previous installments. It feels like, for once, studio-heads sat down with Zack Snyder and had a long chat about the unforgotten failure of Batman v Superman: Dawn of Justice and the hefty price-tag that comes with making a bloated, brooding blockbuster with little emotion and no lasting impact. With that being said, Justice League is not the $300 million Snyder-directed, Joss Whedon-salvaged hot mess you’re probably expecting, for it’s too competent to be called an abject misfire. It is, however, another weak entry in the aforementioned universe that has more than solidified that its longevity will not be synonymous with quality, and that a well-made, favorable product likely won’t be produced if it’s missing “Wonder” from the title – or maybe “Aqua,” we can suspect.

Discarding the Marvel blueprint for grace and groundwork that allowed The Avengers to storm on the scene in 2012 with each of its costumed members previously introduced to the public, Justice League arrives with only three of its six characters formally established. They are the wealthy Bruce Wayne (Ben Affleck), who needs no introduction, the fierce Diana Prince (Gal Gadot), and Clark Kent (Henry Cavill) , who is revived later in the film – don’t act like you didn’t see it coming. The remainder include the embraceable schmuck Arthur Curry (Jason Momoa), who becomes Aquaman, the punky smartass Barry Allen (Ezra Miller), who becomes Flash, and the athletic but somewhat helpless Victor Stone (Ray Fisher), who becomes Cyborg. The six misfit superfriends come together to “unite the league” in efforts to stop Steppenwolf.

To address the new characters at hand, for I’ve already explained my feelings on Batman, Wonder Woman, and Superman, Momoa’s aquatic merman leaves me optimistic for the forthcoming stand-alone adventure. There’s a weight to his presence when other characters become weightless, and there’s an interest to his underwater acrobatics that shine in combat. Momoa also has a similar presence to The Rock in that he’s a muscle-bound beefcake that doesn’t take himself too seriously, and is not allergic to a little heart-to-heart with his fellow heroes even if one member’s accessory does play a big role. Both him and Gadot steal the scenes they’re in, as well as most of the show, but only one comes as a real surprise.

Moreover, Flash and Cyborg show what happens when you unleash two new characters with heavy backstories that don’t have time to materialize in a two-hour movie. This also doesn’t help when the characters are less than admirable people or downright contemptible, the latter in regards to Miller’s Flash. Flash is the single-most obnoxious and downright insufferable superhero I’ve yet to see; a mix of third-rate Deadpool-esque sarcasm and “did I do that?” Homecoming-Spider-Man incompetence, Miller’s Flash is a disastrous incarnation of a hero you wish would be the one sacrificed to the all-powerful villain of the film. Cyborg, on the other hand, shows he probably couldn’t have even sustained a supporting role ala Tony Stark in Captain America: Civil War, as he lacks an identity and seems to be at the mercy of his armor at all times.

Justice League also features atrociously bad acting and writing that unfortunately defines much of the film. I have every reason to assume that the inevitable porn parody of the film will feature better performances and more interesting writing. Whedon, who took over directing and some screenwriting duties when Snyder dealt with a family tragedy, and his influence are felt with the prolific tendencies of Flash and other characters to conclude scenes with misplaced or desperately unfunny humor. In addition, Snyder and his accompanying screenwriters’ (Chris Terrio and Whedon) tendency to overplay dramatic moments by ending scenes on unnecessary one-liners that land with a thud cripple any kind of emotional leverage the film could’ve had ala its opening sequences. No one besides Momoa and Gadot feel comfortable in their roles, and Affleck’s suit and Cavill’s overplayed return all feel like they’re too big and boisterous for even the veteran performers to handle.

Justice League, like Batman v Superman and Man of Steel, swallows its performers in a grossly expensive pigsty of pyrotechnics and computer-generated gloom the likes of which they cannot help sustain nor function alongside. The final product is a rickety introduction that marches the DC extended universe forward like clodhoppers on a field of eggshells, in the end, accomplishing very little but making a big mess in the process. It is indeed a more tolerable and occasionally impressive experience than anything that came before it that wasn’t named Wonder Woman, but it furthers the opinion of myself and many others that, as long as a good portion of the universe is in the hands of Zack Snyder, it has no chance in succeeding whatsoever.