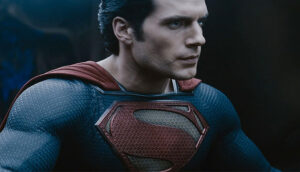 Zack Snyder’s Man of Steel is an exhausting summer blockbuster, clocking in at one-hundred and forty-three long minutes and boasting enough special effects that could be adequately housed in two one-hundred minute films. By the time the credits roll, I was ready to admit defeat to the film’s non-stop special effects and sixty-five minute concluding battle-scene. Just when you think it’s over, out pops another trap or accessory that has the ability to start things all over again. Things like that are when I begin to think superhero films are almost cheating at their own game.The big question is will this satisfy comic-book readers and please devotees of the caped-man in blue? I honestly have no idea. It rewinds time, yet again, to produce another origins story about the imminent destruction of the planet Krypton, which results in Jor-El (Russell Crowe) sending his infant son down to Earth. His son’s pod crashes in Kansas, where he is raised by a gracious religious couple played by Kevin Costner and Diane Lane under the name “Clark Kent.” Clark grows up with unearthly powers, such as the ability to shoot laser-beams out of his eyes and see through walls and skin. Later in life, he evolves into Superman, and his duty calls when General Zod (Michael Shannon) threatens the safety of the planet Earth if he isn’t returned to him at once.

Superman, this time around, is played by Henry Cavill, a likable soul who is unfortunately burdened by inhabiting an entirely cold shell of a superhero. Superman has almost no personality, and is even robbed of the internal Clark Kent/Superman identity crisis that has been so prominent since Superman’s surface in the comic books. If anything, from watching the original 1978 classic a matter of days ago and viewing this one, it seems that both films portray him as nothing more than the textbook hero figure that comes equipped with heavy morality and inert development. It seems that the character’s mood is shaped not over time but by the characters close to him, such as the Daily Planet journalist Lois Lane (Amy Adams), Zod, or his parents. He doesn’t appear to possess the ability to develop through his own internal-thought process and remains almost a voodoo doll to others in terms of what he should do and how he should do it; there’s little independent thinking going on in his head. He almost always does what is expected of him and that’s no fun.

In addition, Snyder misses a bold opportunity at exploring the agony of the character. In a scene lasting roughly three minutes, he shows a young and overwhelmed Clark Kent in the classroom, becoming nauseated and dizzied over his incredible powers of seeing through skin of him and his classmates. Upset, frazzled, and deeply concerned over his well-being and sanity, he runs into a closet and locks the door, shunning himself from the schoolchildren and further ostracizing himself as a “freak.” The scene, however, solves this immense conflict in a matter of minutes and never returns to the core idea that these powers are curses and not benefits. This frustrating agony in Kent’s everyday life is left massively unexplored and we get an underwhelming taste on what the possibilities could bring.

Aside from Superman, most of the other characters lack recognizable identities. Shockingly empty and left untouched is Lois Lane, who seems nothing more than the obligatory lead rather than the well-known female protagonist of the entire franchise. Zod, while having the benefit of being played by the remarkable and amazingly talented Michael Shannon, is a pretty ordinary villain, with ordinary superpowers and a numbing ability at producing predictable lines. His time to shine, and the entire film’s in retrospect, is when Zod’s UFO in the sky shuts down all electricity and plays a demanding message on all electronics demanding Superman’s detainment. It’s a creepy scene, pulled off effectively because of its unexpected timing and the tremendous eeriness that comes along with the robotic video. Sadly, it takes up about two minutes of this endeavor.

Excusing all of the aforementioned details, Man of Steel really amplifies the chaos in the action department. The final battle takes up almost half of the entire film, and featuring dizzying camerawork, indiscernible action, chaotic repetition of Superman and Zod careening into building, and loud, overly-bombastic sound-effects that sit right up there with “Transformers: Dark of the Moon.” I almost feel guilty critiquing this part, since I talked down about the excessive use of slow-motion videography in Snyder’s 300. Now, I wish he at least slowed this film down to a more watchable level. Shots begin and end so quickly, the rapid-fire editing does nothing to the overall suspense or quality, and the final battle, itself, defines muchness in cinema. There becomes a point went “coolness” becomes monotonous and I think that could accurately sum up much of Snyder’s career in film.

Man of Steel has a lot going for it in terms of reception and reactions. Marvel has owned the superhero game for several years now, establishing one hero after another, and even releasing the mega-hit “Avengers” in the nick-of-time to untold millions last year. DC has been a quiet entity and their decision to make Justice League in a few years with many of the heroes still undeveloped in the public eye is a risky move. If Cavill’s Superman will be a big figure in the forthcoming hero-film, then there definitely needs to be more humanization and more in the way of an identity to the muscled icon rather than just emptiness and expected-kindness.

Man of Steel was written by David S. Goyer, who penned all three installments of Nolan’s Batman trilogy. Christopher Nolan, himself, donates his name as a producer’s credit on this film as well. Despite these talented names behind the scenes and the effective actors in front of the camera, “Man of Steel” hardly has a leg to stand on. It doesn’t capture its environment, character, or its depth even half as well as the aforementioned “Batman” trilogy did, and leaves its character wholly vacant of personality and its action muddled and sloppy. The cityscapes are occasionally photographed to a solid extent, when we can see them, the pacing exists, if a bit diluted, and the Hans Zimmer score isn’t as oppressive or as noticeable as it was in The Dark Knight Rises. But Man of Steel could definitely take notes from The Dark Knight Rises in terms of recognizing humanity in its title character and disregarding ponderous action sequences. Action sequences are only memorable for so long; character conflicts and relationships in superhero films are what make them memorable and even relatable. With this film, Superman, again, remains an alien to the public as he does many of the characters in this film.