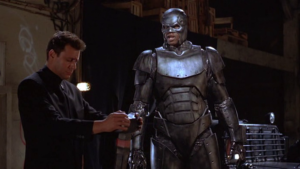 From its opening moments that firmly define the morally good characters in stark contrast to the amoral ones to its later instances that continue to illustrate the wide gap between the two types, Kenneth Johnson’s Steel reminded me of Michael Jackson’s Moonwalker — the video-game as opposed to the movie. Some will remember said video-game for its novelty, as the player took control of Michael Jackson himself as he went around labyrinth-like platforms, rescuing kids and wiping out enemies. There was a strong sense of moral good in that game; Michael was the hero who wanted to bring children to safety upon rescuing them from the evil Mr. Big.

Like a video game, Steel has a very broad sense of good and evil, and this caricatured treatment, which makes itself evident from the start, is one of the many attributes that works to the detriment of what could’ve been silly, enjoyable fun. Based off the DC Comics character, John Henry “Steel” Irons, Steel has often been listed as among the worst superhero films ever made, and one doesn’t have to watch it to realize why. From its corny positioning of NBA superstar Shaquille O’Neal as the titular character, the simplicity of its storyline, and its micro-budget ($16 million) in comparison to other superhero films, it’s the freak-misfit of the genre. In a time when superhero movies boast budgets as high as the net worth of a small company and have captivated a legion of audiences with intertwined characters, universes, and storylines, Steel is a product of a bygone era in superhero cinema. Furthermore, it also arrived in theaters during a time when superhero movies could and would bomb. I suppose the modern-day equivalent would be Suicide Squad (also a DC product) or Venom, two superhero films that looked bad and got annihilated critically, yet still made money comparable to their more improved, credible counterparts.

Shaq stars as John Henry Irons, a former military-man who works as a weapons designer. He proudly assembles high-tech guns, gadgets, armor, and other weaponry to be used by the U.S. military on the frontlines of battle. An early scene establishes the aforementioned good-and-evil dichotomy by showing one soldier, Nathaniel Burke (Judd Nelson), go a little too power-happy as he sets one of Irons’ canons to the highest setting and blows a crater through a building that houses their own base. Irons’ partner Susan (Annabeth Gish) is left in a wheelchair from the falling rubble, and Irons rats out Burke in court, causing him to be dishonorably discharged.

But Burke’s tour-of-duty, at least in his own mind, is far from over. He decides to move forward with selling many of Irons’ weapons to street criminals, cornering the shady owner of an arcade to help him peddle his wares. Irons, in the meantime, sees Bruke’s plot and works to assemble his own specialized line of high-caliber armor and weaponry in response, which turns the already hulking, seven foot-tall vet into a bullet-proof giant. Equipped with great protection and aided by Susan’s technological prowess along with his young cousin Martin (William Norwood Jr, better known in the present as rapper Ray J) and Uncle Joe (Richard Roundtree), Irons becomes “Steel,” a crimefighter for the polluted streets of his poverty-stricken neighborhood as it’s just about to be invaded with more weapons courtesy of Burke. Steel tries to bring law and order back to the streets while keeping Martin away from the area’s gangmembers and operating under the nose of his protective grandmother (Irma P. Hall).

The special effects in Steel are almost charming in their cheapness, as they provide the film with a Saturday morning cartoon feel in the most genial sense. They’re complimented by writer/director Kenneth Johnson’s desire to perpetually lampoon Shaq’s basketball career in gleefully unsubtle ways, such as when he shoots a brick when taking a shot at the schoolyard amongst kids a third of his height, and in another instance when he misses the garbage and shrugs it off by saying, “free throws were never my strong-suit.” All bets are off when he gets into that steel-suit, however. Talk about giving new meaning to “Hack-a-Shaq.”

What ultimately cripples Steel is its pacing. It takes way too long to get any meaningful momentum, and when it finally does start to get interesting, as Irons makes his transformation and Burke slowly gets the upper-hand, the film essentially becomes a bloated action setpiece. The climax is marginally entertaining solely because of the trickery Steel imposes on the unsuspecting Burke, whose lack of knowledge in regards to the use of Steel’s primary tool is exploited in the knick of time, but these are all merely amusing details that ultimately don’t make for a compelling picture. Shaq is a likable personality thanks to his wide smile and charisma, but much of that is muted under a by-the-numbers origin story that leaves little to the imagination. The moralistic themes catch up to the film all too quickly and make it feel like an anti-gang/violence PSA as opposed to a credible superhero film, and there’s not enough laughs, battles, or scenarios that elevate the entire project past below-average fluff. Both Shaq and Steel deserved something much more entertaining as opposed to the cinematic equivalent of Shaq Fu.