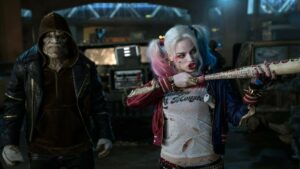 The DC Comics Universe is just one or two poorly received and financially underwhelming movies away from being entirely abandoned only to rebooted a few years in the future, where we will soon bear witness to yet another Batman and Superman movie. It’s contemptible to be such a pessimist, but when Man of Steel, your introductory film to the world of these characters, was as stunningly ordinary as it was, Batman v Superman: Dawn of Justice was forced on audiences with minimal backstory and setup, and now Suicide Squad crashlands into theaters introducing more than a half-dozen new characters, even someone who wasn’t always sold on Marvel’s commodities sure appreciates the grace and carefulness the brand had when he’s faced with another DC Comics film.

But, as usual, I’m getting ahead of myself. Suicide Squad the most mixed of mixed bags; a film that’s sporadically entertaining, featuring some of the best, most commendable character development for a superhero film since Guardians of the Galaxy and Ant-Man, yet gets lost in a murky muddle that is a lack of focus and a serious crisis for a conflict. The film spends so much time building up and exploring on the ideas of its characters, as it should, but when it comes time for a villain to take the stage, we essentially see that this film is less a conventional superhero film and more of an intervention led by the squad for one of their members.

The film takes place shortly following the conclusion of Batman v Superman: Dawn of Justice, where CIA operative Amanda Waller (Viola Davis) works to assemble a group of deranged, deformed serial killers with questionable mental stability to do the violent and potentially lethal dirty-work for the United States government. The band of serial killers are Deadshot (Will Smith), who made his career out of being an assassin, Harley Quinn (Margot Robbie), a once renowned psychiatrist who fell in love with and became manipulated by the Joker (Jared Leto) to become as nuts as he is, Captain Boomerang (Jai Courtney), an arrogant murderer who uses whatever weaponry he can find like a boomerang, El Diablo (Jay Hernandez), a heavily tatted former gangmember with incendiary powers but a strict moral conscience, and Killer Croc (Adewale Akinnuoye-Agbaje), a deformed, hulking man with reptilian skin, making for a rather grotesque appearance.

Led by Col. Rick Flag (Joel Kinnaman), also appointed by Waller, the group’s prime task is to find and assist Dr. June Moore (Carla Delevingne), now known as “Enchantress,” after her archaeological studies resulted in her being transformed into an immortal witch with extreme powers. Meanwhile, the squad finds ways to do as they are ordered in addition to fulfilling their own list of priorities; Deadshot wants to get home to see his daughter, Harley Quinn wants to be reunited with the Joker, Boomerang wants his prison sentence eliminated, Diablo wants to be at peace with his demons, and Croc simply wants to watch BET.

For the first half hour of Suicide Squad, we watch Viola Davis’s Amanda, who is essentially a hardened, stricter version of Nick Fury, assemble this group of unruly misfits and presents us with strong backstory behind all these characters. Whether we love them because they’re bad, or needed more reason to loathe these characters because they are so grotesque and unsavory, we get depth and complexity to their stories. Even their relations between one another, particularly Deadshot and Harley, Harley and the Joker, and El Diablo and Deadshot, are given the attention to detail necessary for the DC Universe to have some sort of groundwork going into two of their most ambitious projects next year (Wonder Woman and Justice League).

The problems come into play with just how safe the film tries to play it, going as far as not giving a real villain for the characters to interact with, but instead, simply having them try to rescue and save another potential member of the squad. Whether that was a decision made by writer/director David Ayer (Fury, End of Watch), I cannot say, given the recent influx of studio drama that has made headlines over the past few days, but I can say that it makes the film feel relatively incomplete.

There is also that same sort of gloominess that hovers over the film that becomes depressingly grim after a while. The tone would work better if black, sinister humor was woven better in the screenplay but, aside from Harley and maybe a line or two from Croc, there’s not enough black humor to really contrast the bleakness of the film either. Some more playfulness – more along the lines of Deadpool than the annoying quips of Avengers: Age of Ultron – could’ve been infused in the script, especially when the chaos begins to reign, and faceless enemies start taking massive amounts of gunfire and explosions to every limb.

Suicide Squad flounders back-and-forth from modestly entertaining to quietly disappointing following its first thirty minutes of very intriguing character introductions. Its band of heroes, characters, and their respective actors – particularly the delightfully twisted Robbie, the distinguished and lovable Davis, and Leto, though his psychopathic Joker is terribly underwritten and feels thrown in like Venom’s story did in Sam Raimi’s Spider-Man 3 – clearly provide the sustenance and wit necessary to carry future installments. And yet, the film’s major problems come in the form of the lack of a villain, constant gloominess that underwrites any kind of dark comedy the film had potential to explore, and one of the characters the film’s marketing campaign heavily utilized being terribly underwritten.

At this rate, by the time the DC Comics Universe gets its act together, stops stumbling, and gains some sort of a balance, perhaps people will have finished their own race to see better, more assured films.