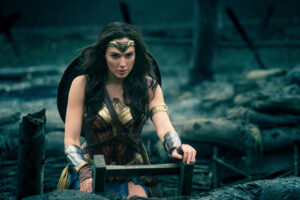 The stakes of Patty Jenkins’ Wonder Woman were almost impossibly high. Not only being Jenkins’ first film since she directed Charlize Theron to an Oscar with the 2003 film Monster, Wonder Woman comes at a time where the Rotten Tomatoes approval ratings of DC movies are lower than that of our current president. Man of Steel, Batman v Superman: Dawn of Justice, and Suicide Squad have not only left sour tastes in the mouths of comic-book fans, but have all worked to further Marvel’s stock and show how the comic-book movie industry is still, without any doubt, a two-horse race where one is chalked.

But rest assured, Wonder Woman is something of a marvel, no pun intended: a thoroughly enjoyable movie from DC with a great performance at its core, a visual palette that’s, for once, great to look at for an upwards of 150 minutes, and, to put it bluntly, a vehicle to buy time for the struggling comapny to assure audiences they’re not simply a franchise that churns out nine-figure budget films that become memes in record time. Much like Joe Johnston’s Captain America: The First Avenger, the film is a departure from the blandly modern, dimly lit cityscapes present in most superhero films in favor of a classical recreation of war-time locales. It’s an ostensibly small detail, but it drives the film’s success in terms of being a mostly effective superhero film and period drama on the same level.

The setting of the film is World War I, something comic-book fans will note as being one of the larger creative changes to the narrative, as Wonder Woman originally existed with the second World War as the backdrop. Nonetheless, we open on the isolated island of Themyscira, where dozens of Amazon women are trained from youth to be warriors. One of them is the young and adventurous Diana Price, who grows into a 5000 year old immortal with a stern moral compass pointing to compassion and doing the right thing. This is why, without thinking and against the better judgment of her mother Queen Hippolyta (Connie Nielsen) and her leader General Antiope (Robin Wright), Diana swims out to sea to rescue pilot Steve Trevor (Chris Pine) after his biplane crashes off the coast of Themyscira.

After a swarm of soldiers are killed by the Amazonian women, Diana and the others interrogate Steve with the iridescent Lasso of Truth, getting him to confess that he is a spy tasked with getting information about German General Ludendorff (Danny Huston) and his plans to create and employ a new form of mustard gas. Diana believes the one responsible for this war and carnage is Ares, the “God of War” she was always told about when she was a little girl that came and conquered all of the existing Gods in the world, but failed to obliterate Zeus. Zeus, in response, created an island of Amazonian women to protect them from the dangers of the outside world and that’s why they reside in the bubble that is Themyscira.

Steve, at the insistence of Diana, takes her to London, Belgium, and other parts of Europe in order to defeat Ares and come to terms with defining her responsibility in a new, war-torn land. Diana, who eventually becomes Wonder Woman amidst trench warfare in the middle of no man’s land, is both confused by the repressive and specific set of unwritten rules for people in developed nations and disgusted by their cowardice and lack of dignity when it comes to dealing with foreign conflicts. She’s repulsed by the way a German official can sit back and demand the incarceration, murder, and starvation of people from other nations in a way that shows no honor or willingness to fight or earn any kind of respect that isn’t fear-based.

It is then that Jenkins and screenwriter Allan Heinberg (a comic book author who wrote the screenplay for the failed Wonder Woman pilot on The CW) come to terms in how they want to approach Wonder Woman’s origins. Rather than make her out to be like Superman, one of her many comrades in the Justice League, an empty, muscular vessel who sees the world in black-and-white shades of obvious morality, Wonder Woman is the optimistic force in a pessimistic world; the very definition of someone raised in a bubble. She can’t understand why Steve sees her compassionate outlook and desire to help rather than hurt as a flawed ideology, and Steve can’t understand how she can have her head on straight and think things like that, much less be so confident to take off her trenchcoat and reveal such provocative, primary-colored clothing.

Gal Gadot, who takes on the not-so-easy task of playing Diana, also knows how to play her character in a way that doesn’t accentuate such obvious qualities of morality or emptily conceived ideas about what makes a definitively good hero. She’s unaware of how vulnerable she is at times, but that’s what makes her brave and not the archetypal “strong independent female character,” which is becoming, dare I say, a cliche in itself. Gadot as Diana is so great because she won’t allow the character to fall for those same tropes, and that makes her infinitely more interesting. Also, having someone as fearless as Gadot in the titular role helps too, as she explodes on-screen and remains the most interesting aspect of the film.

The problems with Wonder Woman that rear their ugly head in a time that I would love to gush about the first film about a female superhero in over a decade are, unfortunately, present and need to be addressed. For one, this is clearly an origins story, a 141 minute one at that, and it seems Heinberg doesn’t know how to tell Wonder Woman’s beginnings in a way that doesn’t feel like the makings of a two-part story. The great opening scene at Themyscira feels unfinished once Diana and Steve leave for London, and the amount of dialog and setpieces we must sit through as audiences becomes draining by the second act. Seeing Diana and Steve storm in on closed-door-conversations, pace about in hopes of trying to find out whether or not Ares actually exists, and tracking down Ludendorff could all make for inclusions in sequels, but to do all of them in one film makes Wonder Woman classifiable as a film of its genre that tries to do way too much just as its getting its foot in the door.

Another problem is how restrained Gadot feels when it comes time to embrace Wonder Woman, usually after being Diana for long narrative stretches. Ignoring Jenkins’ obvious inexperience in directing large-scale battles, as she curiously opts for closeups too often, it seems just when Wonder Woman starts gaining momentum as a costumed superhero, Gadot is hurried to the next scene where she must play Diana again for another half-an-hour. The clock-management between when Gadot is Diana and when she’s Wonder Woman is about on par with that of other DC films, and that’s to say it’s mediocre.

But Wonder Woman‘s power is in Gadot’s somewhat unsurprisingly strong performance, given she was one of the best parts in Batman v Superman, in addition to a strong emphasis on visuals as well as a mostly compelling origins story. Save for some plodding exposition, an incoherent finale, and notable inequality between Diana and Wonder Woman, Jenkins’ film will undoubtedly appeal to a key portion of its target audience, who has understandably felt neglected during a time of disproportionately male superhero films (the last female superhero film we got was Elektra, in case you forgot). Because of that, the film may be subject to overpraise, but perhaps it’s also the fact that after the likes of a lackluster Superman origins story and a borderline awful fight between the caped hero and Batman, Wonder Woman really seems like a masterpiece. At the end of it all, the film allows us to come to one nearly unified consensus this time around and that’s DC succeeded. Mostly.