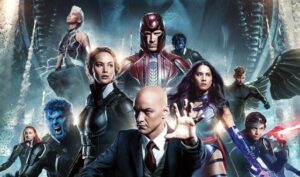 It wasn’t until I endured X-Men: Apocalypse that I realized how little information about previous X-Men installments is still with me after watching practically the entire franchise two years ago this month. Each film’s events seem to blend together, though many of them are completely different, and directorial shakeups, character arcs, and specific villains are anything but consistent in this sixteen-year-long franchise that has tested the weight of a chronological timeline/universe whilst being a part of the larger Marvel universe.

And truth be told, Apocalypse may indeed be the last X-Men film I watch for that very reason. While this is the worst installment in this franchise I’ve seen thus far, even the ones I gave good reviews to, Days of Future Past and X2, for example, I can barely remember. One must recognize when a franchise is becoming nothing more than a time-sponge or a mental weight and the former describes X-Men quite perfectly for me — a time-sponge that leaves me little to chew on once the credits roll.

With all that stated, X-Men: Apocalypse is a woefully bad film, arguably destined to make my list of one of the worst films of the year. This is a miserably ugly movie in every sense of the word; an ass-numbingly long affair that is either too slow or too loud depending on what facile plot-point is used to segway into the next scene and a cluttered showcase of characters during God-knows-what point in their life and their mutant career.

The story focuses on the awakening of the mutant Apocalypse (played by Oscar Isaac, but under all that CG and heavy artillery, who would’ve guessed?), so it’s up to the X-Men characters to try and defeat his Four Horsemen. Professor Charles Xavier (James McAvoy), once again, leads the group of Mystique (Jennifer Lawrence), Magneto (Michael Fassbender), Cyclops (the young and talented Tye Sheridan), who posses the ability to shoot uncontrollable beams of light out of his eyes and is one of the film’s main focuses, amongst others in order to try and take down Apocalypse to save the human race.

The first hour and a half is plagued by a series of globetrotting vignettes that has all these X-Men characters meeting up in the slowest way possible. Bringing these characters together by way of a gleaming “X” symbol that shines in the sky could’ve prevented about an hour of such agonizing buildup. During this time, slow and groggy conversations are had by characters encapsulated under the darkest and most visually putrid conditions so much so that the film’s artistic scheme feels like it was crafted in the halls of an abandoned hospital.

After the hour and a half of methodical buildup, we get the fight with Apocalypse, which is burdened by some of the most ear-shattering sounds of any superhero film of recent memory. The cacophonous sound-track doesn’t even work to establish any sense of fear; it’s just obnoxiously loud, especially when Cyclops has to uncontrollably shoot the aforementioned lasers out of his eyes, causing for imminent destruction of everything in his line of vision. Put those two elements together and you have a loud mix of chaos captured with ugly cinematography for a stew of lackluster quality.

Only one good and memorable sequence exists in X-Men: Apocalypse, and it involves the dopey but admirably original soul Quicksilver (Evan Peters), as he rescues everyone from the destruction of Professor Xavier’s school by using his unfathomable running speeds to humorously save every potential casualty one-by-one. During this roughly three-minute sequence, the Eurythmics’ instantly recognizable jam “Sweet Dreams” plays and makes for a winning scene that works because, for one, it’s intense, and two, it’s also a break from the overbearing ugliness Apocalypse has bestowed upon us since the opening credits.

While part of me feels that this might be my own personal fatigue with the genre (this is already the fourth superhero film of the year, and third from Marvel), part of me recognizes that this is where X-Men is headed. When you have a franchise as messy as this one, with so many hands in the pot in a writing sense, and a lot of different visual schemes employed by directors of both big budget spectacles like Matthew Vaughn and Bryan Singer, and more low-key men like Gavin Hood, you have a disorganized franchise that has little to no sense of structure and time.

Throw in the fact that X-Men is an utterly massive world with a great deal of characters, yet we’re still focusing on the same old souls for the ninth time, if you’re not fatigued or at least somewhat discouraged by the smothering sameness, you have more patience than me, dear reader. X-Men: Apocalypse is an unbelievably bad superhero film, and in a year that saw the release of Batman v Superman: Dawn of Justice, don’t take that statement lightly.