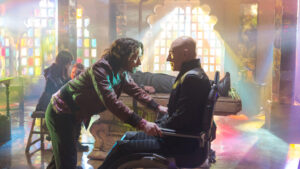 X-Men: Days of Future Past is the strongest, most complete X-Men outing since the first two films of the franchise, unsurprisingly so given the return of director Bryan Singer, producer Simon Kinberg, whom now serves as the film’s writer, and a hefty budget increase to show off the film’s special effects work beautifully. The film also manages to provide the same dramatic leverage as its first two entries, and make the films more about themes and overarching political ideas rather than your simple, interchangeable superhero outing.

Faithful readers of mine will consider how disappointed I have been with this year’s, and last year’s crop of superhero films, citing disappointment in some way, shape, or form with Iron Man 3, Man of Steel, Captain America: The Winter Soldier, and The Amazing Spider-Man 2. My tolerance level for this genre has far past been exceeded and, rather than feeling like I haven’t seen it all anymore, I feel as if I’ve seen everything a few times too much. This is the last superhero outing I care to indulge myself in until August with the release of Guardians of the Galaxy and, even with that film ostensibly tackling convention and pre-conceived Marvel quips, I could easily wait till like November if the studio had second thoughts.

The film opens in the future, where a gaggle of mutants, led by Professor X (Patrick Stewart) and his nemesis Magneto (Ian McKellen) try to save the world from killer robots by the name of Sentinels. In order to stop the Sentinels from being used as government weapons, the X’s team of mutants send Wolverine (Hugh Jackman) back to 1973 to stop Mystique (Jennifer Lawrence) from killing the Sentinels’ creator Bolivar Trask (Peter Dinklage). In addition, Wolverine meets younger versions of people like Xavier (James McAvoy) and Magneto (Michael Fassbender) and learns how their personalities came to be in the future.

First and foremost, we need to talk the film’s special effects, which feel more prevalent and intricate than other Marvel outings. For one, the film doesn’t feel so much a candy-colored parade of the color wheel, but instead a collection of very intriguing special effects and linear battle-sequences that do not provide for confusion or lack of clarity. Singer manages all of these through a lens that is perfectly competent rather than chaotic, and after recently enduring the mediocre X-Men: The Last Stand, where Brett Ratner’s direction lacked all grace that was implemented by Singer, it was a pleasure to see the man who birthed the franchise and gave it the life it had return to his baby to help it along after four films where he was absent that weren’t met with the same considerable praise.

A great scene that shows off the fluidity and flare of the special effects is when Hank McCoy (Nicholas Hoult), a mutant with super-strength, super-speed, and super-agility, tampers with a bunch of enemies aiming guns at him and the numerous X-Men by slowing down time and tampering with their positions and movements while in a slow-motion haze. Hoult — who was effective in last year’s Jack The Giant Slayer and Warm Bodies — has finally fund a role he can sink into, and is given a plethora of smug lines to recite for good measure.

Second of all, Singer and Kinberg work to resurrect the themes that the original two X-Men first presented, which was the question of whether or not humankind and mutantkind could coexist? We can see that seven films later, whether they take place in the past, present, future, or alternate dimension of reality, this question still has difficulty being answered, and Singer doesn’t leave Days of Future Past to present itself with easy conclusion and simple, cookie-cutter wraparound stories. He genuinely has a fondness for the characters of Wolverine, Storm (Halle Berry), X, and Magneto, and wants to see them portrayed in a respectful light; that’s all fans wanted with their X-Men adaptations and, after a little chronological confusion and uncertainty, this is what they have with Days of Future Past.

The question all X-Men fans will be asking after this film is “where does it leave the franchise that is now seven films deep with no sign of ending?” The answer is the same as it was when all the film’s predecessors ended: “open for more ideas.” We still need to see a sequel to Origins, the most-recent Wolverine endeavor, and a follow-up on this timeline. If we have another game of “musical directors” for these future adaptations, I will be a bit worried. If Singer is in the driver’s seat, then it’s as if Jesus took the wheel at this point. Right now, I’m just happy I’m not writing another middle-of-the-road review on a superhero adaptation, and even happier this will be my last review of a recent superhero film until August.