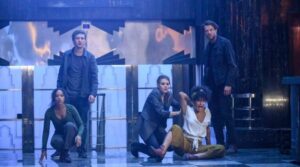 You’re either all in or all out on Escape Room as a franchise going forward. Once you watch Tournament of Champions, I presume you’ll have your answer 30-40 minutes into another loud, logic-defying affair. Perhaps you had your fix after the original, the first theatrical film released in America back in 2019. Or you’re like me and this time around exited the theater thinking, “same time next year, I hope.”

As a passionate fan of both the Final Destination and Saw franchises, Escape Room was a gift I was proud to accept two years ago. For once, a PG-13 horror film that kicked off a new calendar year didn’t feel as derivative as its genre-forefathers nor limited by its rating. Instead, it felt creatively potent. It plunged us into rooms where clues didn’t come easy, characters revealed their backstories over time, and tension incrementally rose with each frustrating dead-end. You won’t ever find me in an escape room, but you will find me riding this franchise until it crashes; ostensibly when director Adam Robitel gets bigger and better offers.

If you missed the original Escape Room, Tournament of Champions opens with a recap that will mostly suffice. The original involved a group of five individuals invited into a game constructed by a company known as Minos Corporation. Each room they encountered had a distinct visual theme (a waiting room with huge oven-lamps hanging overhead, a poolhall where the floor was the ceiling and vice-versa). Hard-to-find clues were the only way the heroes could escape with their lives.

The rooms were supposed to produce one survivor, but instead, two emerged: Zoey (Taylor Russell) and Ben (Logan Miller). After their experience, naturally, no one believed they were telling the truth. That doesn’t stop Zoey from being obsessed with proving that Minos is real. She drags Ben on a road-trip to Manhattan, where she believes them to be headquartered, to collect evidence. Zoey and Ben are soon lured onto a subway car, which quickly derails and send them and four strangers — all having survived one of Minos’ past escape rooms — into a new series of imaginative rooms.

These rooms — including an art-deco bank secured by lasers that appear if the wrong tile is trigged, and a beachside resort with something suspicious lurking beneath the sand — are immersive and detailed. So much so you can’t help but try to rationalize how a corporation could erect such impeccable titans of architecture yet disappear so swiftly without a trace. The beauty of Tournament of Champions is that while it so enthusiastically defies logic, it never makes any promises to adhere to it in the first place. These rooms consume you with their level of attention. Once more, Robitel and the set-designers work their magic to make you an involved moviegoer rather than a submissive one. Trying to discern the details and scale the makeup of each room is part of the fun that remains mostly in tact for this sequel.

Tournament of Champions does indeed qualify as a sequel that offers more of the same as opposed to one that ups the ante. The most implausible of implausible twists are thrown in as if to give the idea that Robitel and company are trying to take the story further. If anything, I was captivated by the underlying idea that the characters are progressively losing their agency rather than their grip on reality. Escape Room‘s essence revolves around exorbitantly wealthy and powerful elites gambling their riches on real-life gladiator games with working class pawns as their primary targets. It’s a hair like The Purge, but with less unchecked chaos and an emphasis on contained environments. Coming out of one of the deadliest pandemics in history, this idea only gets more unnerving when it’s explored in a manner as decorated and insane as this.

Let it be known both of these films would be significantly lesser pieces of schlock if it weren’t for the strengths of Russell and Miller, whose platonic chemistry works to iron the rough edges (this sequel’s more frantic pacing). The film fittingly concludes with the tension being replaced with paranoia, which is a hell of a direction to take this franchise as there’s still gas left in the tank and a wily corporation that appears to grow larger with each room.