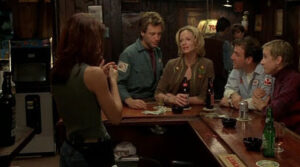 Taking place during a bleak, frigid winter in Rockaway Beach, New York, No Looking Back centers on Claudia (Lauren Holly), a waitress at a local diner with a murky path forward. She lives with her boyfriend, Michael (Jon Bon Jovi), who works as a mechanic. The two are kinda-sorta engaged, but marriage isn’t happening anytime soon. Michael wants to get married, but Claudia frets over the thought that she’ll still be at the same diner serving the same grease-laden food to the same crop of regulars.

It’s an existence you can bet thousands upon thousands of individuals across the United States live every day, in an area that, save for a couple good restaurants and a few reliable bars, offers its inhabitants little leverage out of the same rut.

Things get complicated for the couple when Charlie (Edward Burns) returns to town after a three-year absence. Him and Claudia were once together, but he ditched her with no goodbye. Now he wants to pick up where they left off. Charlie and Michael were once best friends, and over a beer, Michael informs Charlie that him and Claudia are together. To say Claudia is caught off guard by Charlie’s arrival would be an understatement. Their first meeting is as awkward as they come. But then she takes a liking to his mystique, and soon, his habit of dropping by unannounced and entertaining her with grandiose yet vague promises entice her.

Following the breakout indie charmer The Brothers McMullen and what was essentially an inferior remake in She’s the One, writer/director Edward Burns opts for a melodramatic approach with No Looking Back. The tone is notably more somber, with visuals suggesting the film itself is in mourning of something. The generous $5 million budget ostensibly went to licensing several Bruce Springsteen tunes seeing as you could assume Burns could’ve made this film on McMullen‘s budget ($28,000) with little struggle.

On top of the fact that No Looking Back has Burns finally pursuing a different direction, it also assumes the quality of a tone-poem. Certain stretches are devoted to scene-setting sans dialog. Overtime it’s as if you can feel the wintry bite of the frigid air that engulfs this overcast beachside locale. With merely three characters to juggle, Burns lets the conversations (usually involving two of the three castmembers at a time) be the star, and succeeds thanks to adequate writing and solid performances. Bon Jovi will surprise many by how understated yet frank he can be.

But where Burns struggles yet again is in character motivations. In She’s the One, it was downright inexplicable that Burns’ character was willing to marry a woman he met merely 24 hours prior, but not commit to uprooting his life to move to Paris per her wishes. In No Looking Back, it’s never quite understood what Claudia sees in Charlie. No explanation is given as to where Charlie was for the past three years. His plan — should he land Claudia all over again — is the two of them move to Florida, but for what? He has no job offer. He doesn’t seem to have a specific skillset. He’s nomadic and has commitment issues, but at the end of the day, he offers Claudia an escape from her 9-5 hell at Typical Diner USA.

Burns is cloudy on these details, but he irons things out with the ending by affirming what was the case all along: this is Claudia’s story, not Charlie’s. To end on a note entertaining Charlie would’ve come off as both shortsighted and vain. There is a maturity to the conclusion that shows Burns’ evolution as a writer breaking away from thinking of stories revolving around brothers with vulgar Irish sensibilities. And that counts for something.

NOTE: Apropos of nothing, but if you look closely, early in No Looking Back, Kevin Heffernan (of Broken Lizard fame) can be seen as a diner patron in what would be his second feature-film role after Broken Lizard’s directorial debut Puddle Cruiser.