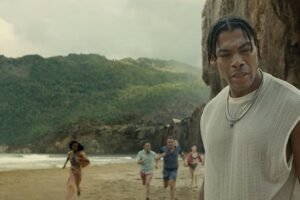 The dual appeal and problem with M. Night Shyamalan films is you expect a twist. You’ve expected one for over 20 years at this point. You think about the forthcoming reveal throughout the entire movie. In the case of Old, once that moment arrives and plays out, you would’ve rather the circumstances be what they are.

Shyamalan finds himself in a Rod Serling state-of-mind, having characters experience a rush of emotions as they watch themselves (and more painfully their kids) age inexplicably before their eyes. Critic Matt Singer brings up a novel point in that this film compares less to the first three seasons of The Twilight Zone and more to the fourth season when the episodes were extended from 30 to 60 minutes, which had many stories lose their tight narratives.

Things set into motion early, with the main family — consisting of husband Guy (Gael García Bernal), wife Prisca (Vicky Krieps), and young children Trent (Nolan River) and Maddox (Alexa Swinton) — taking a vacation to an idyllic beachside resort. The resort manager informs them of a secluded little nook off the beaten path where they’d be better served to avoid touristy crowds. They’re taxied by Shyamalan in his most obvious cameo yet. Once there, the family realizes they have company: a doctor named Charles (Rufus Sewell), his wife Chrystal (Abbey Lee), Charles’ mother (Kathleen Chalfant), and his daughter (Mikaya Fisher) make up one family. A third couple (Ken Leung and Nikki Amuka-Bird) arrive along with a rapper (hilariously) named Mid-Sized Sedan (Aaron Pierre).

The beach is secluded by towering stone that feels threatening from the moment they arrive. Waves crash against the rock wall with a thunderous boom every few seconds. When they try to walk back from where they came, they faint and wake up on the beach again. Cut to Trent and Maddox disappearing for a little while only to rejoin their parents as Alex Wolff and Thomasin McKenzie. Roughly five years passed in just a matter of hours, and the two ostensibly hit puberty just before lunch. The group figures that every 30 minutes translates to about a year, creating significantly greater problems for the adults, who experience vision deterioration, dementia, and even cancer.

Once on the beach, Shyamalan has a lot of fun with the group panic. He plays with the surreal concept in both the makeup and continuity department. The cast is uniformly solid too. Bernal brings his usual level-headed, straight-man demeanor to the material. Wolff continues to impress growing from a child actor to a very believable character actor, especially when tasked with delivering raw emotion. Moreover, Abbey Lee’s Chrystal finds her footing as a woman simultaneously so obsessed with her appearance yet so paranoid about her hypocalcemia that her plight becomes the most riveting.

What really manages to sell this thing is the atmosphere. Shyamalan has always been a man capable of creating beautiful aesthetics, even in his most dreadful works (The Last Airbender). With his trusted cinematographer in Mike Gioulakis, the duo don’t miss a beat in capturing the scenery. They highlight an attractive amalgam of the inherent beauty of this beachy enclave and a distracting ominousness. As nightfall approaches, this sense of dread truly comes into play, and you might have to remind yourself there’s no killer lurking in the nearby forest. It’s simply a matter of time.

What brings Old down is nothing I haven’t griped about in my past reviews of Shyamalan’s films. His dialog is still borderline atrocious at times, further solidifying the fact that he needs a reliable co-writer. When Guy and Prisca come to terms with their marriage, it’s nearly impossible to believe they’re two human beings having an emotional conversation. They’re tragic reminders that humans aren’t nearly that eloquent nor mannered in times of duress. Ultimately, however, it’s the ending that comes close to sinking the film. It’s cold and unsatisfying in its linearity. As such, we emerge as moviegoers not pondering the passage of time, the inevitable threat of getting older and slower, or even the uncomfortable thought that we might not be around for pivotal moments in our children’s lives — and we’ll also have to watch our parents die. We instead leave addressing the twist, which doesn’t handle the overarching duality (both problematic yet beneficial) with any poise whatsoever.

There might not be a filmmaker as consistently inconsistent as M. Night Shyamalan. There too might not be one who still has the ability to rope you into each new project in spite of himself.