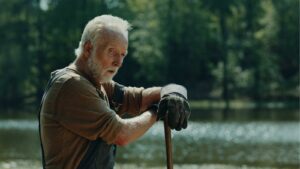 We meet Billy (Tobin Bell) within the opening moments of A Father’s Legacy. A crotchety old loner, he spends his days doing chores around his pondside estate that was once home to him and his late wife, Cynthia. When the day’s duties are done, he stands in the vestibule for a casual prayer. “I only talk to you because Cynthia made me promise to do it every day,” he mutters, looking upward at the sky. “Take me whenever you want, I don’t care.”

Billy’s life gets interesting one day when a man nursing a bullet-wound (Jason Mac) seeks refuge in his home at gunpoint. He’s hot off a robbery where he just nabbed thousands of dollars. Over the course of several days, the two men form a bond as the elder teaches him about life, marriage, choices, and chores, all in a day’s work.

Premiering as a one-night-only event in select theaters this summer before humbly arriving on video-on-demand outlets, A Father’s Legacy is as unassuming as a tranquil morning coupled with coffee. Over 83 fleeting minutes, there’s little that’s revelatory in its writing. By definition, it’s a dialog-driven picture, but that dialog is usually kept at a few sentences glacially exchanged between the two parties.

It’s all worth it to hear Bell — who I still can hardly envision as anyone but John Kramer — spout pithy lessons about fatherhood, and at one point pull a shotgun on his newfound houseguest before saying, “If I was gonna shoot you, I wouldn’t have wasted a fresh bandage.”

You can discern from the jump that A Father’s Legacy is a personal project for writer/director/producer/actor Jason Mac. Your suspicions are confirmed when the film concludes and you see the dedication to his own father. This grants A Father’s Legacy authenticity. As far as talky dramas are concerned, you could do far worse than this pairing as well. The veteran Bell imparts some of his fine-tuned skills on the younger Mac, and the scenes they share on Billy’s porch or near the pond have a welcomed casualness. Some of the perfunctory dialog loosens the believability (and feels like basic screenwriting, frankly), but Bell and Mac keep their characters grounded — especially Bell, who has mastered the art of speaking with a tinge of remorse in his voice.

A Father’s Legacy brings up God and the Bible enough to be considered a faith-based drama, yet this is more rugged territory than the genre likes to traverse. It substitutes proselytizing for calm conversation, which makes it an easy watch. Also aiding it are gorgeous shots of the peaceful South Carolina backwoods, where Billy has resided for 46 years and counting. While a lasting imprint might be too much to ask, Mac succeeds in making A Father’s Legacy a reflective story about the importance of a father in our lives.

Now call yours, regardless of how much he pisses you off.

NOTE: A Father’s Legacy is now available to rent on multiple video-on-demand platforms.