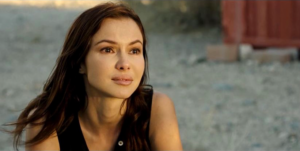 So jaw-droppingly unpredictable and weird that Quentin Dupieux might send his regards, Miranda Veil tips the scale early into its first act. The first 20 minutes might have you cringing at the setup, which along with the dialog, feels clunky and derivative. And then the storyline kicks in and you’re left to untangle a messy yet consuming web of existentialist musings and cryptic conversations.

With the influx of films being released any given day on a variety of different platforms, it’s unsurprising something as genuinely different as Miranda Veil slips through the cracks. Not since Parasite has there been a feature not merely difficult to classify in terms of genre, but so defiantly against such a notion. The early minutes will have you convinced you’re watching a gruesome torture piece until you find yourself watching something of a road movie. And then a light-hearted comedy. And then an atmospheric sci-fi tale. If there’s one thing writer/director Levin Garbisch doesn’t want to be, it’s someone who is easy to put in a specific box.

Set in Barstow, CA, the story begins in familiar fashion. A would-be serial killer named Soren (Zach Steffey) has a woman bound and blindfolded in a shack in the middle of nowhere. He can’t bring himself to murder her, however. Something is…off. An unseen voice inside Soren’s head — a hokey but sparingly used device, blessed so — implores him to carry out the murder, but Soren wants his first kill to mean something. Judge that how you may; serial killers have standards too.

Soren has a notebook detailing women he’s stalked over an indeterminate amount of time. He combs through and decides the fresh, newly 21-year-old Miranda (Annabel Barrett) will be his first. Soren abducts Miranda and takes her to the same barn where he breaks out a wide variety of knives and tools on which to use on the poor woman. But a strange thing happens when Soren kills Miranda. She comes back to life. Again. And again. Inexplicably. After the third or fourth failed attempt to put her out of her misery, she confesses to her captor that she felt herself playing along with the previous torture devices, revealing she didn’t feel much, if any, pain.

As you can infer, this discovery renders both Soren and Miranda frantic. She insists he drive her back to Barstow, so she can provide some relief to her friends and family. Along the way, however, the duo meet a handful of eccentric characters named after animals: the Fox (Dean Satriano), the Rabbit (Esmond Fountain), and the Cat (Irena Violette), who speak with a clinical tone as they discuss past traumas and parables.

One of the highlights of Miranda Veil is seeing Annabel Barrett grow into her character. She starts as a faceless twentysomething with partying on the mind until she manifests into a proactive participant in her life. Barrett grows as Miranda does, and after a while, she’s almost unrecognizable in cadence from the woman we initially met guzzling liquor with her girlfriends. She’s the anchor in a project that ebbs and flows, sometimes to a fault.

Such is the case with many films predicated on the absurd, or horror films looking to further subvert the genre, Miranda Veil does tend to meander the longer it goes. When its assembly of animal-named loners enters the picture, spouting all sorts of philosophy, the story isn’t demystified so much as it is continues to be shrouded in mystery. Garbisch doubles down on the ensuing weirdness, and at the end of what is a deceptively long, 105-minute road, I felt no closer to pinpointing a takeaway then I did when I realized Miranda couldn’t die.

Garbisch’s aesthetics are to be commended. Not even acknowledging its premise, the dusty, desert locale, natural lighting, and soft color palette make Miranda Veil feel like the work of the aforementioned Dupieux (Deerskin, Rubber). The absurd qualities of the premise aren’t leagues away from Dupieux territory, but rather than the characters looking at the most ridiculous quandaries with a stone-faced matter-of-factness, Garbisch makes the characters’ confusion one of the primary focal points. Therein suggesting a resolution, which I’m not sure this film brings — especially after the long, winding road it takes to get there.

There’s an old saying amongst critics that we’d rather watch an ambitious misfire then an average film that plays by the rules. It’s hard to call Miranda Veil anything less than a success on the basis of originality alone. The cast of largely novice/unrecognizable actors turn in quality performances on roles where there’s hardly a blueprint, and Garbisch (along with cinematographer Josh Andersen) excels at making this story visually attractive. With the thought in mind that we’ll be hard-pressed to get a film quite like this again, the fact that it leaves meat on the bone feels slightly discouraging.

NOTE: Miranda Veil is available to rent on multiple platforms.