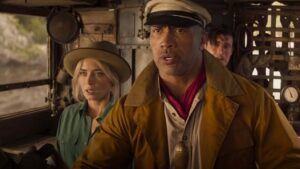 Where Jungle Cruise excels is in gifting audiences a classically minded, good time at the movies. It’s a swashbuckling family adventure reminiscent of old Disney films ala 20,000 Leagues Under the Sea, Swiss Family Robinson, and more recently, Pirates of the Caribbean and Journey 2: The Mysterious Island. This breed of film has practically gone extinct, traded for spandex-clad, nine-figure budgeted superhero epics that, at least for me, have continued to wear out their welcome ever since Captain America: Civil War.

It’s not that Jungle Cruise is a great movie. It has its issues. But it’s daring enough to stand out in an overcrowded marketplace that has swept away this genre like a strong rip-current. I can make peace with its issues thanks to the thrill-ride it offers.

Within the opening minutes, we meet Lily Houghton (Emily Blunt), a decorated adventurer who is following in the footsteps of her legendary father. She wants to travel deep into the Amazon jungle circa 1916 in effort to retrieve an arrowhead that’ll help her in locating the Tears of the Moon. The tears are petals that could aid modern medicine in ways similar to the Tree of Life. Without an inability to navigate the treacherous jungle hazards alone, Lily and her uppity brother MacGregor (Jack Whitehall) enlist in the help of Frank “Skipper” Wolff (Dwayne Johnson) to bring them to their destination.

Let’s talk about Skipper for a minute. He’s the only connection to the real-life Disneyland attraction. The one extended callback to the popular-yet-somewhat-maligned ride comes when we are introduced to him working his day-job, which is taxiing tourists upriver while making the corniest of jokes. He points out to the peanut gallery a pair of Toucans “beak-fighting” on a branch. “Only ‘two can’ play that game,” he quips. Lovers of dad-jokes such as myself rejoice. It’s great material.

Worth noting is Skipper is a bit different from Johnson’s ordinarily amiable, larger-than-life persona. He’s disillusioned with life, perpetually in debt to a crusty, gold-toothed harbormaster in Paul Giamatti, who relishes the upper-hand he has. We look to Dwayne Johnson for the big smile, hunky build, and boundless charisma, so to see him in a crankier role is a bit jarring.

Jungle Cruise wouldn’t be complete without a villain, so it’s reassuring to see the role of Prince Joachim go to the perennially slept-on Jesse Plemons. Joachim wants to take the petals for the Kaiser back in Germany. If the idea of Jesse Plemons boasting a thick German accent as he screams at bees gets you excited, you’re in for a treat with this one. He continues to be a master of unchecked smarminess coupled with comic timing, only elevated by his deadpan delivery.

Jaume Collet-Serra — who helmed what I still consider the best contemporary Liam Neeson action-vehicle in Non-Stop — further shows he’s an action director who values a sense of spatial awareness. Whether our leads are fighting treacherous waters or every jungle death-trap imaginable, Collet-Serra retains a steady hand that allows the picture to breathe even when things start to veer into chaos. The artificiality of the project does become apparent, however. There’s a computer-generated tiger that almost looks real until it starts to move, swampy backgrounds that feel incompletely rendered at times, and then some of the worst-looking snakes you’re bound to see in a $200 million motion-picture. Given the lengthy delay Jungle Cruise faced in lieu of the pandemic (it was supposed to be released last summer), it’s rather surprising more polish wasn’t given to the visual effects.

Thanks to the cast, these faults are mostly smoothed-over thanks to electric chemistry amongst the cast, particularly Blunt and Johnson. The two have a platonic, sibling-esque relationship, moreso than Blunt and Whitehall (no slight to the latter, who earns many laughs throughout). Blunt and Johnson are two naturally likable performers, so to immerse them in a high-concept, World War I-era adventure flick is just the kind of backdrop they need to bring out their strengths as performers.

The Jungle Cruise ride will likely continue until the world’s end, as it’s already enjoyed a 66-year run at Disneyland. Love it or loathe it, it led to one of the more palatable blockbusters this year.

NOTE: Jungle Cruise is playing in theaters and streaming on Disney+ via Premier Access.