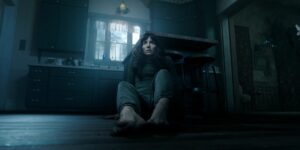 Even detractors of Malignant must acknowledge James Wan’s authenticity. Despite a classic Hollywood promotion from small-budget pictures to blockbusters bound to billion-dollar franchises, Wan is still very much a horror auteur at heart. Aquaman and Furious 7 didn’t recalibrate his long-vested vision of conceptualizing a variety of bone-chilling affairs.

After exhausting all he could out of The Conjuring, and playing it (relatively) safe with Insidious for far too long, Wan unleashes his beast in the form of a giallo-esque picture that draws heavy inspiration from the likes of Sam Raimi and Lucio Fulci. However, even that isn’t an entirely accurate summation. Wan’s Malignant breaks a lot of rules as a horror film, and it won’t dare stand up to logic after that raucous third-act almost no one saw coming. No less, it impresses on the merits of its production, and serves as Wan’s “one for me” movie following tremendous success from the aforementioned blockbusters.

A horror flick cut from the same cloth of implausibility as the Fast & Furious franchise, Malignant revolves around Madison (a totally game Annabelle Wallis, Annabelle), a woman with visions of a strange, almost abstract serial killer named Gabriel. Gabriel has a strange fixation with murdering doctors and medical professionals. Moreover, Madison is already in a dark place, having endured multiple miscarriages and a terribly abusive husband (Jake Abel) over the last three years.

Enter Madison’s sister Sydney (Maddie Hasson), who agrees to visit Madison after extended time away and help her get on her feet. But as the body-count racks up, two detectives — played by a hunky George Young and a fun, mouthy Michole Briana White — are assigned to wrap their brains around a convoluted mystery involving Madison and this inexplicable killer.

That’s about as far as you can go in describing Malignant without veering into spoiler territory. Wan’s approach to the material largely lies in the aesthetics, which include lurid cinematography from Michael Burgess (a longtime collaborator of Wan’s) and a deliciously unnerving score from Joseph Bishara, whose orchestration has the power to play beyond the cheap-seats.

Structurally speaking, Akela Cooper’s script spends a good hour getting us acquainted with Madison and her situation. There’s a lot of the supernatural genre’s usual loitering and rifting, which sometimes makes this a groggy sit. Cooper remains conservative with concrete details long enough to get your mind moving as to what the catch of this haunting could be. After the first hour, the intensity ramps up, and with 30 minutes left to go, Wan and Cooper unleash hellfire. What began as another unassuming entry in the tired genre of supernatural mystery goes full-on Drag Me to Hell with brutal carnage and a large dose of disgusting body horror. It’s all pretty glorious, even if it doesn’t make a lot of sense.

This does prove somewhat problematic for the plot, as up until this point, the detectives, along with Sydney, have developed a fairly good handle on who/what Gabriel is. But when the body count approaches two dozen, and goes beyond doctors, it’s hard to gauge what the ulterior motive is, for both Gabriel or Wan. Perhaps it’s as simple as Wan wanting to make his own blood-drenched version of Atomic Blonde, equipped with stylized bone-cracking and eye-gouging. The sticking point for many with Malignant will be this 180 it pulls. While it’s visually satisfying for any gore-hound, it shatters the narrative, which for all intents and purposes was building quite gracefully until then.

I wrestled with myself in assigning a final star rating. I can argue three is justifiable, but two and a half feels better given the flaws it bears. Regardless, Wan’s spirit gets four. Always.

NOTE: Malignant is playing in theaters and streaming exclusively on HBO Max for 31 days.