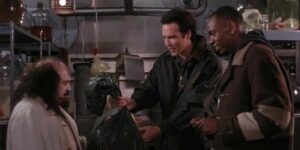 Screwed is a comedy of errors heavy on the errors and light on the comedy. It’s so screwball that it undermines the charisma of David Chappelle and the comic prowess of Norm Macdonald by not playing to their strengths. Having watched many clips of Macdonald since his unfortunate passing, I can’t help but feel that Norm himself would hate a movie like Screwed.

Dirty Work, by comparison, is no masterpiece either. I loathed it when I first watched it, but found it markedly funnier the second time around. I aged, and my sense of humor matured to some degree. I could see it as a send-up of similarly plotted 90s comedies, starring the likes of Adam Sandler and John Candy, that went all out in crafting a ridiculous narrative only to turn around and attempt to have some heart by the time the credits rolled. Dirty Work turned that trope on its head, and followed suit with a middle finger of an ending. You could tell Macdonald had a lot to do with the screenplay.

Screwed turns nothing on its head but itself, practically straining and wheezing to reach a 75 minute-runtime. Its style is one I call “maximum antics, minimum laughter.” The cast runs around so desperately trying to garner a laugh that they forget the principles of wit and characterization. We have to like the characters, even relate to them, in order to get maximum enjoyment. The writing/directing team of Scott Alexander and Larry Karaszewski fail to realize that foundational element.

What we’re left with is a shell of a movie that was made to air on Comedy Central at 2am long after the buzz has worn off.

Macdonald stars as Willard Filmore, an overworked and underappreciated slave to Miss Crock (Elaine Stritch), the curmudgeon matriarch who runs a Little Debbie-esque pastry company. Miss Crock is so stingy she won’t even shell out the money to buy Willard a new suit. The one he wears is the same one his father, who also worked as her chauffeur, did; he was even dressed in that suit at his funeral.

Willard and his pal Rusty (Dave Chappelle), who works at a chicken shack, devise a plan of revenge: kidnap Miss Crock’s precious dog, hold it for a million-dollar ransom, and then use the money to start life anew. Predictably, the kidnapping goes awry, with the dog returning to Miss Crock’s mansion. This is unbeknownst to Willard and Rusty until they realize that Miss Crock has interpreted their letter as though Willard himself has been kidnapped. Cue theatrics.

Willard now must lay-low. The two upload a video of Willard being trapped in a cage and given dog food to CNN (which shows how well the writers, much less the masses understood the internet back then). Miss Crock doesn’t want to fork over the money, leading her company into a financial tailspin. The two even go as far as to hire an eccentric morgue employee (Danny DeVito) to secure a body when they believe she will pay the ransom.

Alas, Screwed isn’t very funny, much less memorable. Its threadbare plot gives way to a lot of idiocy that is mildly amusing but rarely funny. Beyond the pacing being a mess, Macdonald and Chappelle aren’t permitted to function at the comic speeds they’re used to. Macdonald favors deadpan delivery coupled with long-winded setups, and Chappelle is observant. The sequences leave no time for any build-up to occur and happen at random. It’s a shame that Dirty Work and Screwed were the only two films where Macdonald had a lead/co-lead role. However, a middling project like this does nobody any favors in the long-run.