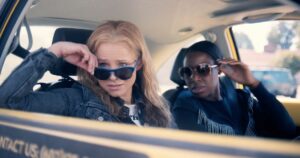 Queenpins joins a rapidly growing list of comedies based on stranger-than-fiction circumstances that dramatize the material so liberally, you wonder if a documentary would’ve been the preferred route. I couldn’t have been the only one left underwhelmed by 30 Minutes or Less, a comedy about a pizza delivery man who found himself with a bomb strapped to his neck. While I was one of the few critics to doll out a positive review of Johnny Knoxville’s Action Point, I fully recognize the essential film based on the infamous New Jersey amusement park was and probably always will be the HBO documentary we got two years later.

Now, here comes Queenpins, which tells the bizarrely true story of two women and their counterfeit coupon-ring. When all was said and done, the women racked up more than $40 million in fraudulent coupons, not to mention acquired $2 million worth of assets, including $240,000 in vehicles, nearly two-dozen guns, and a 40-foot speedboat. A Phoenix-based sergeant spearheading the investigation at the time said that the level of opulence amassed by the women was the equivalent of a drug cartel.

This is material ripe for a comedy, but it’s one that needed a more stabilized direction in order to leave an impact. The movie wastes no time introducing us to Connie (Kristen Bell), a suburban homemaker who has resorted to a life of obsessive couponing. You know the type, or you’ve at least seen snippets of reality shows. These are the people that spend hours combing through sale-papers, buying five of these to get one free and painstakingly keeping inventory of their “proof of purchase” stamps. They often have a pantry filled with enough laundry detergent for the next decade and cereal that will surely go bad before they can finish it. These people spend so many man-hours coupon-clipping and grocery shopping that one wonders when they’ll wake up and truly question if they’re really saving anything, at least metaphorically.

Moreover, Connie doesn’t have much to look forward to. Her marriage with her perennially absent IRS auditor husband (Joel McHale) has gone dry, and her only confidant is JoJo (Kirby Howell-Baptiste), a vlogger with hoop dreams of turning herself into a brand. After receiving a coupon for a free box of Wheaties after pounding out a complaint letter, Connie has a revelation: she can continue to receive freebies from corporations with every hastily worded email. This prompts her and JoJo to hatch an illegal scheme that involves an ostensibly endless surplus of these types of coupons, which they can sell online and use to turn a profit. They get the help they need from an assembly line worker at a Mexican coupon-printing warehouse, set up a website, and are quickly inundated with more money than they know how to manage.

Hot on their trail, however, is a hapless Loss Prevention Officer named Ken (Paul Walter Hauser), whose entire mission in life is to track down…coupon fraud. Ken links up with a determined U.S. Postal Inspector (Vince Vaughn) to demystify the case around the same time Connie and JoJo enlist in the help of a dark web guru (pop star Bebe Rexha).

Queenpins falls prey to the infrequent occurrence in comedies where the subplot and supporting characters tend to be more amusing than the primary characters. I’m convinced Paul Walter Hauser could turn a PSA about mesothelioma into a total riot. Time again, Hauser has made memorable characters out of the thinnest archetypes: see I, Tonya, BlacKkKlansman, or for a lead performance, Richard Jewell if you need further confirmation.

Hauser is uproariously funny as the type of try-hard employee whom every company needs: someone just smart enough to go above and beyond with their duties, but just dumb enough not to realize his hard labor comes at the cost of being exploited on top of a lack of personal fulfillment. Hauser even does what I long assumed was next-to-impossible, and that’s get me to bust a gut at a grown man soiling himself. He can charm a dog off a meat wagon all by himself, but his bumbling gets an added boost when Vaughn’s postal inspector allows him to be a ride-along in the investigation. Vaughn is the straight-man to Hauser’s eccentric personality, but overtime you begin to see both men as two sides of the same obsessive coin.

That’s not to say Bell and Howell-Baptiste aren’t energetic in their own right. The issues rest mostly on the screenplay (penned by the writing/directing duo of Aron Gaudet and Gita Pullapilly). They can’t nail a tone that’s committed to being silly or satirical, and the bite-sized commentary they offer on nefarious dealings being a cornerstone principle of the American dream are half-baked at best. Amalgamating the tones doesn’t quite work either, as Bell’s self-aware voiceover fails to make her the relatable character Gaudet and Pullapilly try to posit.

You could do worse than Queenpins in the department of rainy Sunday movies. Not even a month after it saw the lowest of low-key theatrical releases amidst the pandemic, the film saw a release on Paramount+, which is a perfect home for it all things considered.