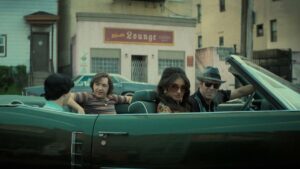 The Many Saints of Newark opens in a cemetery. The voices of the dead babble over one another as Alan Taylor’s camera weaves around the many tombstones. The camera eventually comes to rest on the grave of Christopher Moltisanti (Michael Imperioli), a primary character on HBO’s The Sopranos whom Tony whacked after one too many tantrums and drug issues. Christopher narrates this prequel from beyond the grave.

Sopranos loyalists have long awaited a preamble of sorts to one of the greatest TV shows of all time, but The Many Saints of Newark might leave some cold. The film itself — set in 1967 with the Newark riots serving as backdrop — is loosely structured around a slew of closely connected individuals: including Christopher’s father Dickie (Alessandro Nivola), his grandfather “Hollywood Dick” and his twin brother Sally (both played by Ray Liotta), Hollywood Dick’s young Italian bride Giuseppina (Michela De Rossi), Johnny Soprano (Jon Bernthal), and of course his son, Tony (Michael Gandolfini).

Having not seen The Sopranos in its entirety (I’m disappointed in myself too, thank you), I won’t pretend to know the subtleties I missed nor the interpersonal dynamics for which I have no context. What I can say is it’s possible to get some enjoyment out of The Many Saints of Newark despite entering it with ignorance. There are many characters that command the screen simply by their gravitas, most notably Dickie, thoughtfully illustrated by Nivola. I found myself wrapped up in Giuseppina’s evolution from an Italian immigrant who couldn’t speak a lick of English to a self-assured yet unfaithful woman with hoop dreams of opening her own salon.

But probably the worst thing the marketing team behind The Many Saints of Newark could’ve done is posit this prequel as one that intently revolves around Tony Soprano, as hinted by the paratext. We should’ve all paid closer attention to the primary poster for the film that came stamped with the tagline “WHO MADE TONY SOPRANO”. Words matter. This isn’t “how Tony Soprano was made.” The young Gandolfini’s performance as the character his father made iconic is pleasantly subtle, but often relegated to the background. With some thought, it makes sense. These were the days before he was even a rung on the mob ladder. It’s no small consolation that Gandolfini does walk tall in the shoes of his late dad despite a rather limiting supporting role.

The Many Saints of Newark is burdened almost immediately by its lackluster pacing. Cowritten by series founder David Chase and Lawrence Konner, its episodic structure suggests a meatier story could’ve been told if this were a 10-13 episode prequel series. It would’ve given more time to contextualize Harold McBrayer (Leslie Odom Jr.) and his come-up during the aforementioned riots. Details like his affair with Giuseppina, Tony’s mother Livia’s (a great Vera Farmiga) mental anguish, and Tony’s tight connection with Dickie could’ve matured with time. Also lacking is Chase’s impeccable blend of brutal violence and humor, its shortcomings no more apparent than a gruesome murder scene where a young Paulie Walnuts (Billy Magnussen) and Silvio (John Magaro) are fussing about their suits and hairpieces. It feels decisively off; an inadequately rendered replica of a legendary work.

Besides the performances being uniformly solid, the saving grace is the aesthetics, which are unmistakably a product of Scorsese influence. Taylor’s camerawork feels lifted from something like Goodfellas, or even Carlito’s Way, specifically scenes such as Johnny’s coming home party where dozens of Italians gather to celebrate his return. Kramer Morgenthau’s (Thor: The Dark World) cinematography has that inky texture where you can almost feel the bitter New Jersey Christmastime cold-front. The jukebox music choices are slightly predictable, but still succeed in adding a lived-in quality.

Despite all the time it took to bake, The Many Saints of Newark feels undercooked. A product of Chase’s mind victim to fussing and overthinking because, frankly, how do you follow up a show that left an indelible impact on an audience, a network, and television all at the same time? My connection to the series, again, is rather slim. It is on a shortlist of shows I need to see. That said, I was entertained enough. I can’t blame you, however, if you weren’t.

NOTE: The Many Saints of Newark is now playing in theaters and is available on HBO Max until October 31st, 2021.