There’s Someone Inside Your House (2021) review 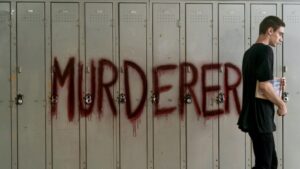 There’s Someone Inside Your House opens with a high school football player in the sleepy town of Osborn, Nebraska gearing up for a big game. He awakes from his nap only to awake hours late and find his family’s farmhouse home wallpapered with photographic evidence of the time he and his friends hazed a gay teammate. Ultimately, he meets his fate at the hands of a killer with a 3D-printed mask of his face and a large knife. The football player’s last words? “If you want money, I can Venmo you right now!”

Such is the tone of Patrick Brice’s latest horror film. A modernized take on the Scream formula updated to fit contemporary ideas such as cancel culture and social consciousness, There’s Someone Inside Your House suggests that the only thing scarier than being hacked to death by a vicious serial killer is the thought of having your darkest secret revealed to the world. That is the way the film’s murderer operates. He dons a mask of the person he’s presently hunting, reveals their misgiving to the world — one girl’s white nationalist podcast here, another guy’s fentanyl addiction there — and then ends their lives, in more ways than one.

Needless to say, in the killer’s eyes, it’s too late for a meticulously written social media apology.

The inexplicable murder sends shockwaves through Osborn High School. Few feel it more than Caleb (Burkely Duffield), the gay athlete who was a victim to the aforementioned hazing incident, who is then suspected to be involved. Screenwriter Henry Gayden (Shazam!) then pivots to a crop of young, diverse co-eds: Makani Young (Sydney Park), a young woman who uprooted from her troubled past; Alex (Asjha Cooper), who looks down on all her peers; Darby (Jesse LaTourette), a transgender student; Rodrigo (Diego Josef), a quiet, complicated young man; and Zach (Dale Whibley), who resents his father and the family farming business.

The prime suspect in the murder is Makani’s ex-boyfriend Ollie (Théodore Pellerin), whose aesthetic could be accurately described as “America’s next top school shooter.” He’s a sullen young man with no emotional exterior whatsoever. As the body count climbs, Makani struggles to rest with a secret of her own; one she’s kept from her welcoming but still judgmental group of friends.

As far as slashers to entertain this spooky season are concerned, There’s Someone Inside Your House is an effective way to pass the time. Based on the YA novel by Stephanie Perkins, it boasts a handful of creative kills coupled with humorous reveals of students’ darkest secrets. Those attributes help to ease its larger burdens, as does a largely likable ensemble of fresh faces (who actually grow into developed characters).

One hang-up is the dialog, which is comprised of largely PC quips that resemble how people speak on Twitter. It’s patience-testing to subject one’s self to this online, let alone hear characters talk like this in real-life settings. Rarely does a scene pass without a character bringing up one of the following words: “woke,” “privilege,” “toxic,” etc. It can be a muchness, and it’s bound to be like the 2019 remake of Black Christmas; a product of its time that will age like milk in that regard.

Moreover, I was able to figure out the killer in roughly 20 minutes. Beyond obvious plotting that basically finger-points to the culprit, I have to echo Mike D’Angelo’s sentiment: you can essentially use process of elimination insofar that you know the filmmakers, for justifiable fear of backlash, weren’t going to pin the crimes on, say, the transgender student. One of these days we’ll see a real boundary-breaking piece of horror that will feature a non-white cast that will have no choice but to be an equal opportunity offender. There’s Someone Inside Your House is not that film, but it’s also not a terribly weak entry, given the merits of its characters.

NOTE: There’s Someone Inside Your House is now available to stream on Netflix.