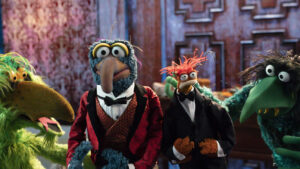 It’s long been surprising to me why Disney — the almighty titan of the film industry with almost every conceivable IP in their treasure chest — hasn’t prioritized Muppets specials revolving around some of their franchises. “Captain Ham-erica,” anyone? It appears that they’ve decided to use The Simpsons for this realm of shameless self-cross promotion (sidenote: I’d strongly advise you to stay away from Maggie Simpson in The Force Awakens from its Nap).

Be careful what you wish for and all, I’m aware, but tell me one or two specials a year like Muppets Haunted Mansion would be a burden. The first TV special since Lady Gaga performed alongside the instantly recognizable band of fur-balls in 2013, this is a silly, spooky way to spend a lazy hour on a dreary October day in order to compliment the most pleasantly frightful time of the year.

Blessed so, Muppets Haunted Mansion doesn’t revolve around de facto protagonists Kermit and Miss Piggy either. Instead, it opens with Gonzo and Pepe en route to the Haunted Mansion in a hearse driven by Yvette Nicole Brown. It’s Halloween and “The Great Gonzo” is up for the challenge of spending all night in the famously spooky mansion. He’s trying to channel the spirit of his all-time favorite magician “The Great MacGuffin,” and he’s confident he can be successful. Upon meeting the “Ghost Host” (Will Arnett) of the evening, Gonzo and Pepe are informed that if they can’t survive the night, their ghostly presences will remain in the mansion forever.

It’s a tough challenge given the fact that the mansion itself knows how to lure you in with temptation. For instance, Pepe is hoping to be starstruck by celebrities like “Bard Pitts,” but instead, he comes face to face with Madam Pigota and a room full of ghosts that have an uncanny resemblance to their Muppet pals. Furthermore, Pepe falls under the spell of Constance Hatchaway (Taraji P. Henson), a ghost who plans to marry and kill him as she has with a handful of her ghost husbands. Gonzo, on the other hand, is simply trying to face his fears while also rationalizing his somewhat baseless fear that nobody will like him if he doesn’t commit to dangerous stunts.

From Arnett to Henson to the late Ed Asner (in his final film role) and John Stamos, the star-power in Muppets Haunted Mansion is enough to elevate as opposed to distract. The litany of folks who have written Muppets screenplays over the years have, to their credit, found a way to balance the human camaraderie while remaining cognizant that it’s the likes of Kermit, Gonzo, and obviously, Statler and Waldorf, who we hanker to see. A credit to Muppets veteran director/co-writer Kirk R. Thatcher (who made his debut back in 2002 with It’s a Very Merry Muppet Christmas Movie) for retaining this principle after some years of cinematic dormancy from the characters.

At 47 minutes long, there is a bit too much hamfisted into such a small runtime. Your mileage for low-hanging jokes, such as Gonzo finally coming to understand the term “ghosting,” Fozzie Bear telling Halloween-esque dad jokes, and the barrage of ghost/ghoul puns might vary. It’s sometimes as if in the process of using the bulk of the film’s (self-admitted) low-budget on decorating the mansion itself, the humor itself was squandered, as it aims for the predictable asides.

Similar to Christmas at Pee-wee’s Playhouse, Muppets Haunted Mansion might be more appreciated by older fans of the characters, given the abundance of cameos from people kids aren’t likely to recognize (Wheel of Fortune host Pat Sajak even turns up at one point). In a world where kid-friendly horror is scarce, and treats like Scary Stories to Tell in the Dark or a quality Goosebumps film are far less common than tricks, it would take a serious scrooge not to appreciate Muppets Haunted Mansion on some carefree entertainment level. I can’t pretend to know what you might think, but I’d like to see a person not crack a smile during the Muppets-led cover of “Dancin’ in the Moonlight,” which bookends the movie before treating us to the whole song along with a lively dance number.