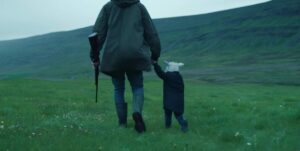 You can call Lamb a lot of things (and believe me, I’m about to), but you can’t deny a few points. The work of Icelandic director Valdimar Jóhannsson making his cinematic debut (in collaboration with poet/novelist Sjón in the screenplay department), this is a film made by intelligent individuals with a lot of care and attention. They believe in this story. They tell it with a measured sense of time and a deft handling of aesthetics. That counts for something.

Moreover, when the bizarre climax occurred, after the initial shock, I felt a wave of sadness wash over me. Even as lukewarm on the entire endeavor as I was, I still felt a sense of despair I ordinarily only feel when a film has gripped me like a vice from start to finish. That, on the other hand, counts for a lot.

Deep in rural Iceland lives a couple, Maria (Noomi Rapace, The Girl with the Dragon Tattoo) and Ingvar (Hilmir Snær Guðnason). It doesn’t take much time to realize there’s something off. They’re noticeably unhappy, almost sullen people. Ingvar spends his days tending to the couple’s farm, which is located in the middle of a remote, mountainous landscape. There’s a joyless dedication in the work Ingvar does on the farm that’s only matched by the cold, clinical way Maria handles her duties inside. A sense of loss permeates the air.

Their lives get interesting and more complete when one of their pregnant sheep gives birth to a half-lamb/half-human hybrid. She comes to be known as Ada, a precious little thing that’s the work of some meticulous use of CGI puppetry, real-life animals, and (probably) a couple young actors. From the neck down, Ada has the torso, arms, legs, and mobility of a human child, but the head of a lamb. Maria is quick to adopt motherly rituals with Ada: she feeds, bathes, and tucks her into bed as if everything is normal. Even Ingvar’s subtle questioning of the whole situation soon turns to him becoming a father to this lamb.

Just as you start to wonder if the couple are indeed seeing in Ada what we, the viewer, see, enter Pétur (Björn Hlynur Haraldsson), Ingvar’s brother who is puzzled by the entire scenario. He spends some time at the house where the three adults watch a game and drink beer. He’s a hair closer to his sister-in-law than socially acceptable, but he challenges both of them when it comes to the presence of Ada.

Finally, something is lurking around the family farm. Initially, it’s Ada’s mother, who understandably wants the baby she recently birthed. But then it’s something else. Something that even frightens the couple’s border collie.

Divided into three chapters, Lamb‘s first two move slower than a DMV line on a Saturday. The dialog is sparse, and throughout the film, Maria and Ingvar move less like recognizable characters and more like those abstract souls you read about in flowery poetry written in the days of yore. Like so many low-key dramas, Lamb is about grief; the loss of a child, specifically. Maria finds a sense of purpose when Ada enters her life, even if it means taking something that isn’t her own. Ada’s mother, to no fault of her own, now knows what it feels like, but Maria’s actions don’t occur without grave (and to reiterate, bizarre) consequences.

The primary issue with Lamb is it does little to arrest you for a good hour outside of some tranquil, if gloomy scenery. Icy skies and ominous sounds draw you into a foreign world that appears robbed from reality (in more ways than the presence of a half-lamb/half-human creature). All of that is fine to look at, but it does nothing for the humanity of the film. Lamb thrives on obscurity for far too long, putting the aesthetics and tone in the forefront as opposed to elements with greater meaning that most audience members can feasibly extract.

This is a film that will surely linger in your mind. It won’t leave rather swiftly like some. It’s at a crossroads between something like Robert Eggers’ The Witch and Ari Aster’s Midsommar insofar that it draws you in with folklore and boasts some body horror to go along with real-life horrors. It just doesn’t play up those beats like it should; at least to the degree of those other, superior efforts. It’s beyond rare we get a movie about an anthropomorphized animal that isn’t animated nor a silly family comedy. With the tone Lamb establishes early, its thoughtful musings on grief — which do exist, albeit not without a lot of generous analysis piled on top of ambiguity — are squandered by more than occasional plodding.