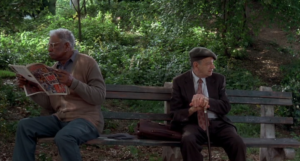 Based on Herb Gardner’s Broadway play that ran in the mid-1980s, I’m Not Rappaport revolves around two men presumably in their early 80s: a left-wing Jew named Nat Moyer (Walter Matthau) and an African-American janitor named Midge Carter (Ossie Davis). The bulk of the film focuses on both Nat and Midge sitting on a park bench, keeping conversation flowing about everything from the trouble with their children thinking they know what’s best for them at their age to the political apathy of the youth.

Nat is a product of labor strikes. Politically active since his teen years, you could believe he cut his teeth on the teachings of Saul Alinsky. Midge, by comparison, is cooler than the underside of a pillow. He’s more sensitive than his counterpart; you can tell by his carefree smile and warm sensibilities that he doesn’t let much get him down. The fact he still puts up with his pal’s ramblings and left-wing diatribes seems more out of loyalty than personal politics. He has lots of reasons to be angry and complain, but who’s going to listen? Probably not Nat.

One of the film’s funniest scenes right out the gate is when we first meet Nat. He’s at a supermarket with his adult daughter, Clara (Amy Irving). Showing a mix of class solidarity and socialistic prudence, Nat scoffs at the prices on multiple items. He haggles like it’s a flea market, and before-long, a crowd of shoppers form around him as he takes a pen to people’s groceries and writes down a price he feels is more just.

I would’ve been perfectly content with a two-hour film of nothing but Nat and Midge sitting on that very park bench in Central Park, laughing, joking, ranting, and occasionally bickering. From all accounts, it sounds like that’s what Gardner’s play was. Somewhere between its successful, if modest, Broadway run and the inception of this film adaptation came what could be considered a lack of confidence from Gardner (who serves as writer/director here). He stuffs this film to the gills with a litany of asides that hold little impact as if he’s compensating for the play’s lack of transitory locations.

There’s a tenant committee that wants to render Midge’s custodial job obsolete, a drug dealer trying to maintain control of his “turf” (the park), and a young lady who is struggling with drug addiction and an abusive boyfriend. Then there’s the insanely silly sequence involving Nat disguising himself as a Mafia member in an effort to save the aforementioned woman from this problematic union. It’s these attributes that turn I‘m Not Rappaport into a skittish sitcom; one that operates as if it’s not sure audiences would buy veteran character-actors indulging in a feature-length gab and chatter.

The one subplot that works involves Clara and Nat. Clara is tired of worrying about where her father is at while she’s at work. She’s tired of roaming Central Park for hours only to find that him and Midge have wandered from their park bench. She feels he would be far more comfortable in an assisted living facility; one with those cutesy regimens for geezers that tackles everything from meal-time to water aerobics. You can only imagine how the cantankerous and fiercely independent Nat reacts merely to the proposition of this lifestyle change. In one hot-headed exchange, he drones on about the need for political action. In a moment of blistering honesty, Clara barks: “Even the Russians gave up. You’re the only one left, dad.”

Distractions aplenty aside, I’m Not Rappaport finds ways to be amusing — once more, mostly when it’s just Nat and Midge sitting on their bench and bloviating about what-have-you. One scene has one of them pulls out a joint and the two proceed to cycle through all those lovely emotions you experience when you get high. Belly laughs about “I can’t remember” to tearful discussions about life. “This here’s cryin’ dope,” Midge says in a line you have to hear in order to appreciate how uproariously funny it is. Nat won’t stand for sentimental, however. “I hate it,” he says about nostalgia. “It’s the dreadful disease of old people. It kills more of us than heart failure.”

When I’m Not Rappaport embraces what made it a successful play, it’s quite funny, even effervescent. When it adopts sitcom subplots that distract from its simple core, it becomes a droning drama that asks a lot of viewers with its 135-minute runtime.

Oh, one last thing: the title is derived from an age-old Vaudevillian joke that is, quite frankly, suggested by the characters, namely Nat, to be a lot funnier than it actually is.