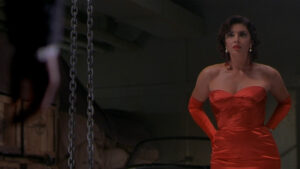 Once in a while, a film like Ghost Ship comes along; a movie with a rock-solid premise, if a shaky execution. Upon release, the film was casually dismissed for being derivative and incoherent, although it had certain appeal. If its opening scene didn’t merit retroactive praise in a ComingSoon.net article a few years ago, chances are, even fewer people would talk about it today, let alone recall its very existence. But going beyond its admittedly great first five minutes, there’s plenty to like in Ghost Ship, save for its indisputably early-2000s thriller vibes and questionable writing choices.

The film opens in 1962, taking us aboard the SS Antonia Graza, a massive ocean-liner where its many wealthy passengers dance and mingle to the beautiful sounds of a sexy Italian lounge singer. A young girl named Katie (Emily Browning, who would go on to be a fairly recognizable face in a variety of films of different genres), sits alone until the ship’s captain extends his hand for an innocent dance. While the ship’s many passengers are lost in the moment, an unseen force unravels a thin wire-cord on a spool, causing it to snap and whip across the dance floor, effectively bisecting everyone, even crewmates, in its path. Katie is the sole survivor thanks to her small stature, but everyone else, even the captain lurching over her, collapses into a mangled, dismembered mess of blood and limbs. It’s an incredible opening that hauntingly sets the tone.

But what happened to the SS Antonia Graza? Certainly there were no survivors aside from Katie to guide it, so its only logical fate was to aimlessly follow the unpredictable tides of the North Atlantic. That’s where a salvage crew comes into play. Led by Murphy (Gabriel Byrne in a very good performance), co-captained by Maureen (Julianna Margulies), and made up of Dodge (Ron Eldard), Greer (Isaiah Washington), Santos (Alex Dimitriades), and Munder (Karl Urban), the crew is informed by a weather spotter named Jack (Desmond Harrington) that there is a large ship wading adrift in the Bering Sea. Jack agrees to pinpoint is location for a finder’s fee and the privilege of tagging along. When Murphy and company hit the rough waters, they are aghast to find the ocean liner is indeed the Antonia Graza, the ship of legends, just floating and waiting for someone to claim it, not only for the untold riches, but the recognition as well. But a dark, dilapidated ship isn’t the only thing the Graza is, but rather, one haunted by spirits, including Katie.

At barely 90 minutes, Ghost Ship bravely adopts a slowburn approach to the story early on, letting Murphy, Maureen, and the rest of the (thankfully) competent crew explore the Graza. They discover its nooks and crannies, take in the still salvageable art that hangs unnoticed on the interior walls of the banquet hall, and can practically still hear the entrancing vocals of Francesca (Francesca Rettondini), the aforementioned lounge singer. Watching the characters roam around the ship allows time for the splendid art direction and cinematography (courtesy of Gale Tattersall) to shine and evoke the doomy atmosphere of an abandoned piece of history as well as the entrapping isolation on the treacherous seas. This is the stuff of bleak, immersive poetry and the film doesn’t disappoint in doubling down on making it all a visual feast.

You don’t hear this too often in horror films with an ensemble cast of everymen and women: this band of misfits is actually kind of interesting, as they are all lightly humanized, making the overall odyssey worth it. What could’ve compelled them, or anyone, to choose a life so dangerous? The insurmountable riches, perhaps? How does one school themselves in the art of navigating rustling waters and putting themselves in harm’s way for the chance at splitting six or seven figures? Such questions must be left for another day, but in the film’s various early scenes that allow for breathing room, they’re thoughts that come to mind. All I know is that Julianna Margulies and Isaiah Washington make fiercely watchable on-screen presences.

Throughout Ghost Ship, there is a captivating juxtaposition of past and present that soon turns into a spooky amalgam of the two, but not in a way that makes you question reality as much as the secrets of the Antonia Graza. It can be said that the mystique the screenplay by Mark Hanlon and John Pogue sets up is more enticing than the inevitable answers we do receive. On that note, it’s also fair to say that the film has that almost distinctive corny, early-2000’s horror feel ala Final Destination and Feardotcom (or even director Steve Beck’s debut feature, Thirteen Ghosts). Some clashing, era-specific nu metal tunes amplify this to mixed results. But the serene way in which Ghost Ship, the Antonia Graza, and the helpless, nothing-to-lose crew lurks into your psyche, along with the beautiful sets and disquieting atmosphere, can’t be ignored.