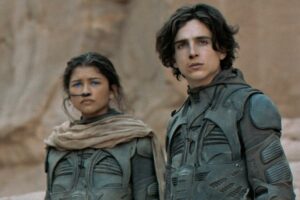 For decades, a faithful film adaptation of Frank Herbert’s cult sci-fi novel Dune was called “unfilmable,” justifiably so. A massive, jargon-laden epic that incorporated hundreds of characters, complex plots, and galaxies — not to mention set in the unfathomable year of 10191 — the novel’s most fascinating failed attempt at the cosmic leap to film was that of the Chilean-French director Alejandro Jodorowsky. Throughout the 1970s, he planned an elaborate 10-hour version that would’ve featured Salvador Dalí, Orson Welles, and David Carradine. The project, sadly, never came to fruition, although enough notes were left on the cutting-room floor to justify a documentary, Jodorowsky’s Dune, in 2013.

Famous film producer Dino De Laurentiis would later tap David Lynch to direct an adaptation, but that unmitigated disaster in 1984 found itself failing to impress anyone, perhaps least of all Lynch (who disowned the movie before it was even released). Herbert’s novel was thought to be too big for any director. Thankfully, Denis Villeneuve loves a challenge.

Ever since his early French films, such as the acclaimed Polytechnique and the Oscar-nominated Incendies, Villeneuve has increased the scale of his productions with each passing project. In 2013, he stormed into American theaters with Prisoners, a brash, immersive thriller that stands as one of the best of the last decade. He chased that with a few more noteworthy follow-ups: Sicario, an utterly bleak deep-dive into the interworking of the drug cartel; Arrival, a meditative sci-fi drama; and maybe most beloved (in America), Blade Runner 2049.

Not even a global pandemic could stop Dune from slamming into nearly every American multiplex, thankfully so. This is a film as arresting as it is frustrating, packing ambition barely contained no matter how large the screen on which you watch it is. God love you if you try and explain its story. Here goes nothing.

Set 34,000 years in the future, in a universe incomparable to anything we know today, we meet Paul Atreides (Timothée Chalamet), who has been groomed to become not only a savior but a unifier of warring houses. On his home planet of Caladan, his parents — Duke Leto (Oscar Isaac) and Lady Jessica (Rebecca Ferguson) — keep a watchful eye on him while taking orders from Padishah Emperor Shaddam IV. The Emperor instructs his folks to take over spice-mining operations on Arrakis, also known as Dune. This includes enslaving the conquered citizens of Arrakis, who are known as Fremen.

Paul is tasked with becoming the “Muad’Dib,” who will emancipate the Fremen and perhaps even get the woman of his dreams. That’s Chani, played by Zendaya, in a performance slight enough to make you hope she has more of an active role when/if we’re so lucky to get “Dune: Part Two.” Standing in the way of the Emperor’s plans to rape and pillage Arrakis is Baron Harkonnen (Stellan Skarsgård), the former ruler of the planet who doesn’t take kindly to being disarmed of his power. The Harkonnens have grown rich coveting spice for themselves.

What’s the big deal about spice? It’s the rarest yet most valuable resource in the world. Known as “Melange,” the powder can increase life expectancy, provide a heightened sense of awareness, initiate interplanetary travel (?), and can unlock psychic powers. It’s a drug with brutal consequences, as it’s highly addictive and promises fatal withdrawals for those who become dependent.

That feels like the tip of the tip of the iceberg, quite honestly. Villeneuve spends nearly an hour laying the groundwork for this world, relying heavily on voiceover and on-screen text in order to contextualize exactly where the hell we are and what the hell is happening. No sci-fi epic is complete without a barrage of supporting performers, and they come in the form of Josh Brolin as a weapons master and a warrior played by Jason Momoa, who I swear is one of the only characters who frequently smiles as opposed to staying stoic.

Themes of colonialism and the theft of natural resources arise through all the exposition, giving Dune even more weight. But I haven’t even begun to address the visuals. If you’ve seen Blade Runner 2049, you have an idea what you’re getting into. This is a profound testament to the visionary genius of Villeneuve, cinematographer Grieg Fraser, and production designer Patrice Vermette. Dune is gargantuan in its landscapes. Undeniably eye-popping in its palette. Even the interiors tower over characters, who look even smaller when they wander across the deserts of Arrakis.

In essence, it’s visual hypnosis set to a pulsating score. Hans Zimmer is not simply keen on trying to introduce new reverbs and instruments into your psyche; he’s intent on challenging the sound barrier in the process.

It’s all fantastical, but it can grow exhausting. Much like Blade Runner 2049, I more-or-less gave up making odds-or-ends of the core story and prioritized the aesthetics, which wasn’t a bad move at the end of day. Like that legacyquel, the primary issue with Dune is the lack of charismatic characters that encourage me to buy into the lofty world. I’m not sure if that’s a problem stemming from Herbert’s text, although I could believe that. The emphasis here is on the themes and the incredibly dense world-building taking place. Momoa’s light comic relief cuts through the gloom of sullen characters who speak in a hush monotone, none more alienating than Chalamet, to great surprise. Chalamet has amplified his boyish charm to deserved praise, but he’s an opaque protagonist to a fault here.

In addition, there’s something to be said for a story this massive that still relies heavily on the “chosen one” trope.

Dune is more impressive than entertaining. Although Herbert predated Star Wars and of course contemporary times, where colossal shared universes are all the rage, its lack of relatable characters (judging by this film alone) and humanoids is perhaps why it never achieved the level of mainstream lore akin to its successors — who undoubtedly took influence, no less.

Somewhere in creating one of the largest, most elaborate universes in the history of the arts, Villeneuve and company forgot to give us the key ingredient: characters for whom we can cheer. As far as 155-minute prologues are concerned, however, it sure is pretty.

NOTE: Dune is now in theaters and streaming on HBO Max for 31 days.