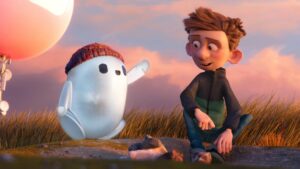 There’s a new kid in town in terms of animation studios: Locksmith Animation was initially a subsidiary of 20th Century Fox, intending to work in conjunction with their own animation division until the studio was swallowed by Disney in the controversial acquisition. No less, Locksmith reached a multi-year distribution agreement with Warner Bros. Not bad for Johnny-come-lately.

Effectively, Ron’s Gone Wrong is both Locksmith’s debut feature and their only film to be released under the 20th Century Studios brand. Visually speaking, it’s a strong effort. Beyond the eye-catching colors we’ve come to expect with nearly every animated film, there’s real mastery in its textures. Lighting and shadows are impressively conveyed, and abstract locations, such as sever-rooms and a tech-giant that essentially operates in a literal cloud are all strikingly detailed. Had the narrative or approach caught up with the animation, we’d really have something to write home about with this new animation company’s hat now in the ring.

But Ron’s Gone Wrong is a ho-hum offering amidst a crowded landscape; even less impressive given the bar for animated features this year has been set by Netflix’s The Mitchells vs. The Machines and Pixar’s Luca. Similar to the bevy of modern dramas with the common theme of grief, I’m getting tired of animated films that have little to offer subtextually speaking beyond the ol’ cliché “too much technology isn’t good for children.”

Ron’s Gone Wrong centers around Barney (voiced by Jack Dylan Grazer), a middle-schooler whose only hope is to one day fit in with everyone else. The socially awkward tween manages to stick out like a sore thumb no matter what. His mother has passed, his father (Ed Helms) hocks trinkets as a salesman, and his Polish immigrant grandmother, Donka (Olivia Colman doing some impressive voice-acting), is too old-world to be cool.

Literally everybody at Barney’s school (humorously named “Nonsuch Middle School”) has this popular gadget known as “B-bot,” aka “Best Friend Out of the Box.” A B-bot is a stout, bubble-shaped robot designed to help children make friends by way of an ostensibly boundless interface that boasts connection and social networking opportunities. Despite operating on a budget, Barney’s father sees how lonely his son is and coughs up the cash to get him one. When Barney boots up “Ron” (Zach Galifianakis), as he’s later known, he notices that his B-bot isn’t like everyone else’s. Unable to connect to the vast “Bubble Network,” it cannot link up with other bots because of a serious malfunction. This sets Barney up to being even more of a laughingstock at school, but also one for Ron to show Barney a more authentic way of making friends beyond likes and live-stream views.

Ron’s Gone Wrong immediately recalls Big Hero 6, a powerful, new-era Disney flick that was predicated on social anxiety and the power of friendship. It stops at the old trope of being about “a boy and his unusual friend;” take your pick from E.T., Shiloh, or any other movie you can think of where you’ve seen that one before. While it merits occasional chuckles and gets no points off for scenery, the film prioritizes chaos over any kind of poignancy. I don’t know what exactly the last 30 minutes was, but I have a hard time getting behind it given its overly rambunctious nature. It’s slam-bang to a frustrating degree.

By the time the story found its way into a huge server-room, I was too busy recalling Space Jam: A New Legacy in disgust to think about much else.

The funniest elements in Ron’s Gone Wrong come from the subplot, involving the CEO of “Bubble,” voiced by Rob Delaney, and the creator of the B-bot technology, voiced by Justice Smith, reacting in horror to the thought of a rogue robot running around. Their reactions, however, are based in different fears. The creator is scared to see his technology prone to violent tendencies when he designed it for a wholesome purpose. The CEO just knows this kind of bad press will drop the company’s stock price. Their boardroom bickering is spirited in the kind of way you can actually believe this sort of discourse taking place behind the closed doors of Big Tech™ companies.

While the film has some sort of pulse on the idea that an overly connected society is hard on everyone, especially children, the theme ultimately becomes buried under a mound of explosive sequences that run themselves ragged. Lost in the shuffle is the touching dynamic between Barney and Ron, as well as any emotional heft that could’ve elevated Ron’s Gone Wrong to the level of its splendid animation.