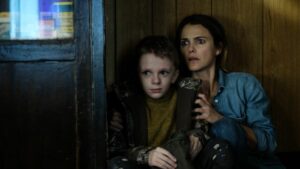 I was beginning to think I’d be a card-carrying AARP member by the time I’d get the privilege of seeing Scott Cooper’s Antlers. Originally slated for an April 2020 release, it finally sees the light of day 18 months later, on one of the worst moviegoing weekends of the year: Halloween. If this was the final call, why didn’t Searchlight Pictures ultimately just release it on VOD platforms for the now-standard $19.99 price-tag?

You’d think after all these years, studio-heads would realize that if you want to release a horror movie in October, you release it on the first or second weekend, so it has the legs to sustain the month. Especially on those oh-so divine years when Halloween actually falls on a weekend. Tis pity, but I digress.

If you know Scott Cooper (Crazy Heart, Black Mass, Out of the Furnace just to name-drop some gems), you know what you’re in for: dark, glum stories with a slowburn sensibility that makes you appreciate the setting. Cooper makes movies about broken individuals in impoverished communities, be them rust belt locales or remote towns where you mentally cross your fingers in hopes your car doesn’t break down should you drive through them.

Cispus Falls, Oregon fits the bill for Cooper’s oeuvre. It’s a recognizably blue-collar community that looks like it hasn’t been updated since Clinton was president. It’s been battered by economic hardships, drug addiction, and minimal opportunities for upward mobility. Julia Meadows (Keri Russell) finds herself returning to the place she once called home in order to reunite with her sheriff brother Paul (Jesse Plemons). This is a place that already stirs up the childhood trauma inside her, and just 20 minutes into the film, you believe this place hasn’t seen the sun in eons — figuratively and literally.

Julia returns to work as a schoolteacher. Her eye turns to Lucas (Jeremy T. Thomas), the quiet kid in class who just looks like he’s seen things no one should. His reserved demeanor and demented sketches suggest his homelife is a horror show. She learns that his mother passed not too long ago, and his father Frank (Scott Haze) has been caring for both him and his brother, Aiden (Sawyer Jones). In the opening scene, Frank and his buddy are cooking meth when they’re attacked by something. Since then, Frank has sealed himself inside his home in a feral state. He looks like a zombie/werewolf hybrid, and Aiden isn’t doing much better either. Lucas just keeps them both locked away in hopes their condition doesn’t worsen. It will.

Adapted from Nick Antosca’s short story The Quiet Boy, Antlers is produced by Guillermo del Toro. Him and Cooper are such a heavenly match I can’t believe I never put the two together in my mind. Cooper’s films are detail-oriented with a great deal of atmospheric shots, astutely framed and handsome even if what they’re showing is downright ugly. This is also aided by cinematographer Florian Hoffmeister (AMC’s The Terror). del Toro, on the other hand, loves inserting magic and fantastical elements into conventional frameworks. Antlers carries itself like folklore; dare I say even more competently than this year’s Lamb.

The writing team of Cooper, Antosca, and C. Henry Chaisson allow substantial build-up before things get violent, almost mercilessly so. They’re gifted two consummate professionals in Russell and Plemons, who have spectacular sibling chemistry stemming from personal trauma and their own emotional vulnerability. At times, however, you wish there was more to their characters than suffocating, often unspoken sadness. There are fine moments of subtlety that suggest past sins. Twice does Julia eye liquor pints behind the counter of a cornerstore, clearly tempted, before exiting without a purchase. There needed to be a little more color to these characters, if for no other reason than these are two actors who clearly embrace challenges.

Destined to be sidelined in the praise department is Jeremy T. Thomas. With few credits to his name, the 15-year-old Thomas is at his best in the frequent moments when he says nothing at all. He’s made-up to appear as if he has the face of a worn-down 30-year-old, yet after what he’s witnessed, you understand that — not to mention his malnourished physique.

Cooper and company are so calculated with the suspense and subsequent reveal that at times you long for Antlers to embrace merely a shred of humor to cut through the gloom. If you know his body of work, however, you know this optimism is futile. When a story is this hopeless, you worry that incorporating humor of any kind will offset the tone, which Cooper works so diligently to build. This is the kind of horror film that will find its audience eventually, deservedly so, as it stands as a strong showcase for all involved.