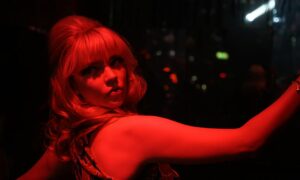 After a year that saw the most populated metropolitans turn into ghost towns amidst the COVID-19 pandemic, Edgar Wright’s Last Night in Soho, among many things, reanimates a city that’s vacancy is perhaps still fresh in our minds. Soho, part of the West End of London, has restaurants, boutiques, and nightlife that rivals any American city. To see it along with Paris, not to mention locations like Chicago and New York City on the home-front, utterly desolate was enough to make you shake your head in dismay.

With big cities finally starting to reopen, nightlife lasting until the wee hours of the morning like it should, and maybe most importantly, movie theaters back up and bustling, Last Night in Soho rides into theaters on a high that compliments itself. Wright has long been one of American cinema’s most notable stylists. Whether he’s filling a zombie sendup with more blood than some franchises (Shaun of the Dead) harkening back to the blocky, 8-bit retro days (Scott Pilgrim vs. the World), or “remixing” the structure of a film like it’s a song (Baby Driver), he unabashedly moves with the wind of his own zeal.

He does so again with Last Night in Soho, a trippy new horror-comedy amalgam that only feels more psychedelic given its soundtrack of 60s deep-cuts. I’m a sucker for anything that makes me recall the vastly underappreciated sextet of Dave, Dee, Dozy, Beaky, Mick & Tich. You might not hear the titular ballad by them the same way again after seeing this.

The plot: Eloise Turner (Thomasin McKenzie) is a young student accepted to the London School of Fashion. Her grandmother (Rita Tushingham) is clearly worried about her leaving her quiet countryside of Cornwall in favor of a more populated pasture. The fears mostly stem from what happened to her late daughter, Eloise’s mother. Gran forewarns “Ellie” before she departs: “London can be a lot.”

Ellie is mesmerized by all things 1960s, right down to the fashion that she envisions will inspire the work she’ll do at school — although not in the way such inspiration arrives. Quickly put-off by the cliquey, gossipy culture of the dorms, she shacks up in a dingy apartment just north of Soho, overseen by a grouchy landlady named Mrs. Collins (the late, former Bond girl Diana Rigg, who died last September).

Maybe it’s the attic dwelling in which she resides or the inescapable scent of garlic emanating from the French bistro next door (whose neon-light incessantly blinks during the night), but Ellie begins experiencing elaborate visions of the past when she lies down for bed. Suddenly, she’s transported to 1966 Soho, and sees (or maybe lives) the life of an aspiring performer named Sandie (Anya Taylor-Joy). Night-after-night, she follows Sandie’s climb as a lounge-singer before she’s coerced into being an exotic dancer, and later a prostitute. The line between Ellie and Sandie’s experiences are blurred. For example, while Ellie witnesses a saucy make-out sesh between Sandie and her manager (Matt Smith), it is she who awakens to find a hickey on her neck.

Ellie eventually finds herself haunted by these visions even when she’s awake. The deeper Ellie becomes obsessed with trying to identify Sandie, the more dangerous her “reality” becomes, with leering gentlemen finding her no matter where she seeks refuge. Time marches on and London’s seedy past surfaces.

Last Night in Soho plays like the nightmarish version of Woody Allen’s acclaimed Midnight in Paris, another film where the lead (Owen Wilson) gets transported back in time to see things about a city’s history that will forever alter his perspective. Like Allen, albeit to a far more extreme degree, Wright (working with 1917 screenwriter Krysty Wilson-Cairns) confidently cracks the lenses of Ellie’s rose-colored glasses, effectively splintering her idyllic perception of London.

Nostalgia is a hell of a drug, as many of us know. Wright and Wilson-Cairns show the perils of such infatuation with the past blinding us to the reality. Furthermore, how we romanticize locales without considering their oft-unnerving histories, simply compounding our own short-sightedness.

Like with nearly every Wright movie, especially as of late, this is a playground for aesthetics to run amok. Cinematographer Chung Chung-hoon (Oldboy) recalls The Neon Demon in the saturation of neon sheen that defines the first act. The second act takes the approach of a sinister, supernatural horror film with the presence of ominous figures sometimes too obscured to decipher yet all-too-real enough to perturb. Finally, the third act is a warbly fever-dream that sparkles with a disorienting showdown I desperately want to witness again. Despite occurring for several minutes, it still manages to end too quickly.

Wright and composer Steven Price dust off some classics along with B-sides from the likes of The Kinks, Dusty Springfield, and Cilla Black to rich effect as well.

If Last Night in Soho is undermined by anything, it’s the story tripping over itself by attempting to juggle too many styles, along with a plot that ditches reality as soon as it tries to cement it. But by now, faithful readers should know my rule of thumb with ambitious, original stories. I’ll let some things slide if the overall product is entertaining. Even if Carnival of Souls should be mandatory viewing following this.