Paranormal Activity: Next of Kin (2021) review 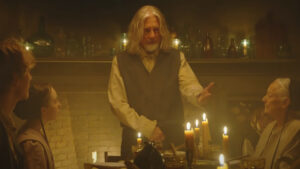 The Paranormal Activity franchise went out on a quiet note back in 2015 with The Ghost Dimension serving as the initial finale. Part of Paramount’s experimental trial to (gasp) release two of their new films on P-VOD once their theater-count dropped to 300, the concluding chapter (and Scouts Guide to the Zombie Apocalypse) was blacklisted from most major theater chains that weren’t AMC due to the move, which was viewed as anti-theater.

That was six years ago. Consider where we are now, deep into a pandemic, where Warner Bros. released its entire catalog onto HBO Max in conjunction with theaters. Or even the fact that some studios completely ditched a theatrical engagement for their features in favor of direct-to-streaming releases.

Paranormal Activity: Next of Kin arrives on Paramount+ as both the seventh installment of the series and a standalone sequel. Relegated to a second-tier streaming service on Halloween weekend with minimal promotion, it has all the makings of a generic supernatural chiller that was retrofitted to be a part of a franchise that took its dying breath years ago. On top of being entirely too generic, its uneven style and derivative framework is only made more disappointing given that it came at the hands of screenwriter Christopher Landon, whose repertoire of four films of this series along with Happy Death Day would’ve suggested a more inspired effort.

Emily Bader, one of the sole silver-linings, stars as Margot, a young woman who never knew her birth family until her 23andMe kit was returned with a DNA match. She learns her family is actually Amish, and one of her relatives, Sammy (Henry Ayres-Brown), actually accessed the website in effort to find her. Margot and her boyfriend, Chris (Roland Buck III), hit the road to Amish country for a documentary project, filming their exploits along with a local sound engineer named Dale (Dan Lippert).

Amish country turns out to be spooky, to the surprise of no one but these three “characters.” Unnerving sounds stem from the attic, Sammy appears to have superhuman strength, red lights inexplicably emanate from the woods, and Margot learns from a strange little girl that her mother might be hiding somewhere in the neighborhood. Ubiquitous jump-scares signal the film has no real clue where it’s going and no idea what it’s building to either.

Within Next of Kin lies one great set-piece and that is a 100-foot subterranean cave accessible only by a harness/pulley system. When Margot and Chris each find their way down, the camera is in their possession as we are dropped into an ominous abyss with crosses lining the walls. Coupled with night-vision, which allows us to see the drop with clarity, blessed so, it makes for a light vertigo-inducing experience.

No less, for a found footage movie, director William Eubank (Underwater) rather sloppily breaks convention. Establishing shots justified as “B-roll” show us the surroundings in a manner that throws off the “participating director” effect essential to this breed of cinema. At times, it’s unclear exactly who is holding the camera, once more loaning to my theory this feels like a script that was growing moss on a Paramount server before it was polished as the latest turd in the Paranormal Activity series.

Paranormal Activity: Next of Kin is like most of the installments that followed the groundbreaking film from 2009 — which reinvigorated the found footage genre and proved that 10 years after The Blair Witch Project — there was still life in the gimmick. It’s a shell of a movie. Reveals happen without justification and a clear-cut explanation is nowhere to be found. Few franchises have been built so intently on ambiguity and a lack of concretion that watching these movies sometimes feels like you’re harnessed down the aforementioned abyss. You don’t know where you’re going and you’re not really sure why you strapped-in in the first place.

NOTE: Paranormal Activity: Next of Kin is now streaming on Paramount+.