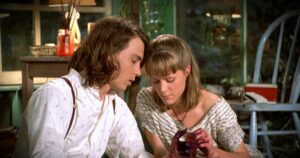 Benny & Joon is the perfect movie about mental illness for those who have never experienced such anguish nor have ever known anyone who did. I envy those viewers. There was a time when I could’ve appreciated this film as one of them. Having witnessed a relative succumb to mental illness that crippled them on a daily basis for the last three years of their life, I wouldn’t wish either of our experiences on a mortal enemy.

That stated, I don’t begrudge viewers who haven’t experienced such hell nor those who enjoyed Benny & Joon on its terms whatsoever. They’re the lucky ones, at the end of the day.

My point being, Benny & Joon‘s whimsical glimpse into mental illness is accessible but shortchanging. My patience for a family-friendly portrayal of such has thinned exponentially. Either show the hell it inflicts on the person and everyone in their stratosphere or step aside and let another film do just that.

Directed by Jeremiah S. Chechik (National Lampoon’s Christmas Vacation), Benny & Joon revolves around two young adults. Benny (Aidan Quinn) works to support his young sister, Joon (Mary Stuart Masterson), significantly curbing his own happiness in the process. On Joon’s good days, she keeps to herself, listens to music, and paints. On her bad days, however, she rages at him and alienates the only true friend she has. She suffers from schizophrenia, although perhaps in an effort to be as broad as possible, the film’s screenplay (penned by Barry Berman and Lesley McNeil) dares not speak the diagnosis.

When Benny does get to see his friends, he often enjoys a game of poker. One night, Joon loses a big bet, and is forced to provide temporary shelter to an eccentric relative of one of the other players. Enter Sam (Johnny Depp), who marches to the beat of his own drum. Looking like he’s late to a Buster Keaton costume party, Sam first appears riding a bus, actually reading a book about the legendary actor. He carries himself with a personality and style amalgamating both Keaton and Charlie Chaplin. Both Sam and Joon tickle each other’s fancies. They’re different from most people and they know it. Together, they own it, much to the chagrin of Benny, who slowly realizes that his entire world has become taking care of his baby sister.

Among a handful of things, Benny & Joon shows the perilous, downward slope when a person predicates their entire life around the needs of someone else. This kind of existence was highlighted in far superior ways in the more-recent film The Peanut Butter Falcon, about a drifter who befriends a mentally challenged boy. In that film, the loner tries to find a delicate balance between allowing the boy the freedom to be himself while offering a hedge of protection versus another character, whose constant protectiveness stifles his own personal growth.

Benny & Joon offers too many moments of absurdity and succeeds at being cutesy as opposed to being honest. It’s a safe, sanitized look at two existences that cripple a person for different reasons. It might’ve been a progressive portrayal of mental illness for the 1990s, but outside of some engaged performances — and that Proclaimers banger “I’m Gonna Be (500 Miles)” — its insights are slim and its approach is pedestrian.

NOTE: Benny & Joon is available to stream on various platforms, including Pluto TV, Tubi, and YouTube, free of charge.