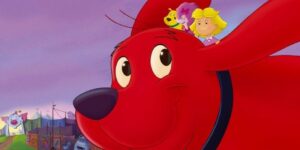 The existence of Clifford’s Really Big Movie, along with the fact that it enjoyed an optimistic yet fruitless theatrical run, only confirms my point that my generation was a spoiled one. We were so frequently treated to seeing our favorite TV characters make the leap to the silver-screen that we (maybe inadvertently?) looked the other way when Hey Arnold! and Clifford got their dues. One could blame the saturated market that naturally made The Spongebob Squarepants Movie and the three Rugrats films tentpoles in the climate, but the blame rests at the feet of 90s kids and their parents, whose incorrigible inaction has now made the advent of TV shows becoming feature-length films a marker of a bygone time in cinema. Chalk up another L for the moviegoing public.

I kid, of course, but Clifford’s Really Big Movie really shows how studios were willing to let any second-tier animated property get some screen-time in the early 2000’s. The difference between the PBS program Clifford and other shows on the station’s lineup, like Caillou, Dragon Tales, and Arthur (a show I still weep for, never getting its own real movie), was that it was chosen by Scholastic to be given the big-screen treatment. It’s a curious thing to note, even moreso because at a mere 68 minutes long, Clifford’s Really Big Movie should’ve been retitled “Clifford’s Pretty Skimpy Special,” or at least been a premier, two-part episode. Desperately little about this film makes it noteworthy enough to be packaged into a “feature” film, let alone one that at one time requested you pay a premium to see it.

The film revolves around the gigantic red retriever (voiced by John Ritter, who died several months prior to the release of this film), who, along with his friends, Cleo (Cree Summer) and T-Bone (Kel Mitchell), head to a local festival and get mesmerized by the dumpster fire circus act known as “Larry’s Amazing Animals.” The troupe consists of a ferret, a cow, and several small dogs, who struggle to overcome their natural fears of heights and general incompetence in order to put on a good show. One day, the ferret, named Shackleford (Wayne Brady), discovers a contest promising great riches on top of a lifetime supply of “Tummy Yummies” (the show’s popular brand of dog-treats). The surplus of cash would keep their operation running for quite sometime, especially with slumping ticket sales.

Clifford comes on board when he overhears his neighbor making remarks to his owners about how much he must eat on a regular basis, given his size. The insulting comments along with the thought that he is a financial burden to his family prompt Clifford to temporarily leave the young Emily Elizabeth (Grey DeLisle) in search of greener pastures; particularly ones that promise bottomless mounds of dog food to keep them afloat. Once a part of Larry’s Amazing Animals, the gang quickly learns to gel with Clifford’s attitude and marquee status; everyone except Shackleford.

The most interesting aspect of Clifford’s Really Big Movie is its animation, which is notably softer, with brighter colors and contrasts than the TV show. The rainbow of vibrant tones suggests that the animators didn’t want to use the same color twice in any given scene. Like other traditional, 2D-animated films released during the time when CG-animation was just about the norm, as a contemporary case-study, it’s interesting to see how animation studios tried to keep things visually distinctive despite lacking what was obviously becoming the dominant technology. The animation is nice, but it also deviates just a hair too much from the show, changing up the look of the characters. Characters’ eyes are a bit bigger, more obtrusive, and there’s a strange, artificial smoothness that I struggle to explain. Watch an episode of Clifford, or even the prequel-series, Clifford’s Puppy Days, then (re)visit this and you might catch my drift.

Clifford’s Really Big Movie gets one moment very right, and that’s a credit to writers Rhett Reese, who went on to write Deadpool and its sequel, and Robert Ramirez, who also directs. The scene comes early, when Clifford runs away after only hearing part of his neighbors’ conversation suggesting the food bills for Clifford alone could bankrupt the family. Clifford is left isolated, walking down a long road and replaying the now-distorted, more mean-spirited comments in his head. It’s a good look at how your mind and malleable self-esteem can blow things out of proportion so quickly, to the point when not being able to think less of yourself, at least in some way, is near-impossible.

After that moment, the film is a mix of squeaky-clean, G-rated entertainment, neither bad nor good, but not worth recommending to anyone over the impressionable age of seven. Years after Clifford’s Really Big Movie, CG-animation did indeed dominate, and still does 14 years later, but thankfully, so do stories that appeal to everyone, regardless of generation. That’s real progression right there.