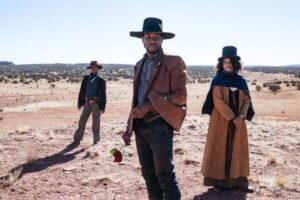 Beyond the fact that Jeymes Samuel’s The Harder They Fall is the unicorn in the Western genre, boasting an almost exclusively Black cast, it’s a stark contrast from other contemporary entries in the genre. The neo-Western movement has been spearheaded largely by writer/director Taylor Sheridan, whose contributions of Hell or High Water, Wind River, and Yellowstone I’ve gushed about and will continue to praise. Throw in Scott Cooper’s Hostiles, or even remakes of 3:10 to Yuma and True Grit — which proved the genre could still be bankable at the box office — and you see one commonality: the new material thus far has been grim and heavy.

The lasting impact of Clint Eastwood’s Unforgiven in 1992, which deconstructed Western tropes and brutally reminded us of the gravity and impact of a single death, simply cannot be overstated.

It hasn’t been all bleak, however, and The Harder They Fall is anything but. It’s cut from similar cloth as Django Unchained insofar it’s another hyper-stylized contribution. Its eye-popping, setting-specific color mimics Dick Tracy. Its bloodshed probably left permanent stains in the sands of Santa Fe from the sheer excess. It comes equipped with a Jay Z-produced soundtrack that invites a barrage of sounds: hip-hop, R&B, pop, soul, classical music, orchestra strings, and even reggae.

Above all else, it’s a triumph for a relatively novice director in Jeymes Samuel making his feature-length debut in a way that simultaneously commands future sister works and posits him as the next-on-deck filmmaker to become a household name.

The 42-year-old London-based singer-turned-director starts things on a brutal note. The notorious gunslinger Rufus Buck (Idris Elba) invites himself into the quaint home of a nuclear family, assassinates the husband and wife with two gold-plated pistols, and takes a knife to the forehead of their son. The kid grows up to be an outlaw named Nat Love (Jonathan Majors, Da 5 Bloods), whose fire for revenge is doused with gasoline upon learning that Rufus is out of jail. Nat assembles his own gang of outlaws (Edi Gathegi, RJ Cyler) to take on Rufus’ deadly crop of associates, including the quick-drawing Cherokee Bill (Lakeith Stanfield, joyously in a villain role for a change) and the icily pensive Treacherous Trudy (Regina King).

Also on Nat’s side is Stagecoach Mary (Zazie Beetz), a brothel owner whose shotgun skills would send shivers down the back of William Munny. On the periphery is the seen-it-all lawman named Bass Reeves (Delroy Lindo), who opts as a soundboard for Nat’s anger.

Samuel and screenwriter Boaz Yakin (Remember the Titans) give classic Wild West figures the comic book treatment, completely rewriting their histories and backstories. It’s been a long time, and the stories of these folkloric figures has faded faster than a mildew-ridden Bible in your grandmother’s attic. Even genre purists would be on the right side of the discourse to admit that Samuel’s recreation of these characters is complemented by his clear affection for the uniformly stellar cast. Idris Elba has had enough “finest hours” to make up a 24-hour day, and once again, he’s powerful as the contemptible Rufus Black. It was already a treat to see Majors and Lindo function as father-and-son in the aforementioned Spike Lee drama Da 5 Bloods. Here, that actorly bond is heightened despite them operating on opposite sides of the law. Perhaps due to be slighted is Danielle Deadwyler as Cuffee, who joins Nat’s quest for vengeance and is a welcomed contrast to Mary in both appearance and impact. Beetz is solid in the role, but it spirals into the usual damsel in distress business you’d assume a film of this decorated caliber would be above.

Alas, The Harder They Fall doesn’t match the strengths of its cast when it comes to its writing. This is a boiler-plate Western that takes a somewhat uneven journey before it finally arrives at the confrontation, set in the all-Black town of Redwood. Its reliance on stare-downs and shootouts ultimately diminishes the impact of the rowdy, blood-laden finale. The climax comes together to satisfy merely on the surface, with several character-arcs left either hanging or completely abandoned. Lindo’s Bass Reeves feels especially shortchanged in this department.

At least Samuel and Yakin spare us the even more boilerplate narrative of escaped slaves seeking refuge on their white owners. It says something about progress when you have a showdown that is entirely comprised of Black characters, good and bad. That’s not to say the writers are passive when it comes to handling race, but they do so in a contemplative manner. Throughout, the film is aware of the conscious and/or subconscious racist undertones of classic Westerns. It just doesn’t amplify it as a social justice rally-cry-for-attention on a subject already at the forefront of the zeitgeist.

It does such with style as well. The film’s best sequence involves Nat and Cuffee waltzing into a white town. The area’s racial makeup is amplified by its citizens of the opposite color, and the fact that literally everything there is ivory white. It gives the ensuing bank robbery an unmissable color contrast. It’s deliciously spicy. If intent on approaching Jordan Peele-esque commentary, Samuel could’ve dialed it up a little more throughout; especially considering the approach at hand is intelligent as opposed to perfunctory.

Far be it from me to scold a very good movie for not being great. Externally, The Harder They Fall is one of the most accomplished features Netflix has given us this year solely from a production standpoint. If it therein spearheads another generation of racially conscious, revisionist Westerns, they might be making more appearances in our homes in the coming years. I’d welcome that.

NOTE: The Harder They Fall is now streaming on Netflix.