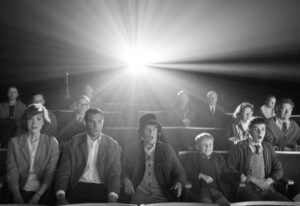 The text at the end of Kenneth Branagh’s Belfast hits you with a deep pain of reality, especially after witnessing all that comes before it: a dedication, it reads, “For the ones who stayed. For the ones who left. And for all the ones who were lost.” Third-generation immigrants or those who have heard disquieting tales from their grandparents about the days of yore are sure to shed tears. If they’re so fortunate to still have them.

Belfast is undoubtedly Branagh’s most personal film to date. He was born and raised Protestant in the capital of Northern Ireland. He had a front-row seat to The Troubles conflict that pitted Catholics and Protestants against each other. This film could’ve been an unflinching look at the riots and needless deaths that occurred during that tumultuous period. Instead, Branagh goes back to being a boy, and shows us this harrowing time through the innocent wide-eyes of a nine-year-old. It’s a different kind of Summer of ’69.

In his debut performance, Jude Hill plays Buddy, who has a lot on his mind, as all young boys do. He’s trying to impress the cute Catholic girl in school, who also happens to be the smartest student in the class. He tries to keep his distance when his parents — Jamie Dornan and Caitríona Balfe, known simply as “Ma” and “Pa” — argue, to infrequent success. Although he might not fully realize it, he’s always picking his grandfather’s (Ciarán Hinds) brain for advice, soaking it all in like a sponge. Then there’s granny (Judi Dench), who always has the perfect clapback to her husband’s sage musings.

The dynamic of the couples couldn’t be more stark. Mom and dad know their relationship is doomed. As if the recurring riots incited by dozens of Catholics wasn’t enough to unnerve them, he is forced to travel to England for work and is gone for weeks at a time. This puts immeasurable strain on mom, but in Buddy’s eyes, she’s as perfect as can be. Pop and granny provide a quiet reflectiveness, not to mention peace, for the young lad as their stories recount decades of shared histories and ostensibly simpler times.

Belfast opens with Buddy playing make-believe with some kids on their bustling street. Then comes an army toting pitchforks, Molotov cocktails, and other weaponry. They smash windows and rig vehicles to blow, threatening the Protestants that it’s their lives they’re coming for next. In that moment, the trash-can lid Buddy is hoisting as an imaginary shield becomes a literal one, protecting him from rocks and debris.

There’s a lingering push-pull with Branagh’s repeated change in tone. In many scenes, dialog is comprised of overheard whispers. Interior shots are oft-canted just to give us a taste of what is occurring in the next room of the family’s tight home. Then a riot happens and the film becomes extremely violent. While a drastic flip, anyone will tell you the highs seem to last for a fleeting moment while the melancholy brought on by the lows appears to be neverending.

Among the film’s litany of great sequences, few are better than one in the third act involving Buddy and a neighborhood gal, who has been trying to recruit him into their “gang.” When she grabs him and tells him he’s “in,” Buddy realizes he’s made a mistake. He’s thrust in the middle of another riot, and is coerced via peer pressure to steal from a business that’s being looted to smithereens. When he returns home to show his mother what he’s obtained, the Irish rage in her comes out — towards him and the other girl.

Growing up with an Irish mother myself, I’ll attest: that fuse is mighty short. I’ve seen the same look Buddy’s mom shoots him in my own, and I’ve been on the receiving end of some (deserved) ass-chewings I can still hear today.

Elevating this heartwarming film are some of the most nuanced performances you’re liable to see all year. Dornan and Balfe are nothing shy of believable as a couple whose marriage is perpetually on the rocks, held together for the sake of their children. Hinds and Dench are lovely; equally believable as a couple who knows a thing or two because they’ve been through the ringer (Hinds earns some of the heartiest laughs to be had). Branagh even sneaks in a grin-inducing Easter egg about the Marvel property he’d eventually go on to direct.

Belfast amounts to a collage of beats that contribute to a devastating yet serene mural. Its comedy is as humorous as its scenes of violence are troubling. It informs us once more that the biggest revelations happen during ostensibly mundane moments in our lives. I’ll accept this as Kenneth’s apology for Artemis Fowl too.