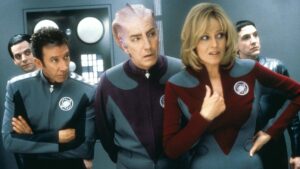 Galaxy Quest treads dangerous territory: the kind where an ambitious concept could’ve been a failure loud enough to justify an ignominy in the sci-fi community. Not only does it blow away even moderate expectations, it’s aged gracefully insofar that the filmmakers couldn’t have foreseen how such franchises went from being a subculture to the dominant culture in less than a million light-years.

It’s so lovingly conceived that it’s only rendered smarter because it reminds everyone that none of this would’ve been possible without the legions of fans who populate Comic-Cons in dozens of major cities each and every year.

Fittingly, Galaxy Quest begins at one of them. Anyone who has been to these events knows the look immediately. We see hundreds of adoring fans (reminder: “fan” is short for “fanatic”) gathered in an auditorium awaiting the arrival of the aging cast of the titular program (an unmistakable riff on Star Trek). Cut to backstage: the cast’s entrance is delayed significantly due to the usual tardiness of Jason Nesmith (Tim Allen doing his best William Shatner), who played Commander Peter Quincy Taggart on the program. Meanwhile, Alexander Dane (Alan Rickman), who played an alien doctor on the program, swears up and down he will not say his catchphrase ever again. Gwen DeMarco (Sigourney Weaver), who played the alluring Lieutenant Tawny Madison, envies her male-counterparts. While they were all discussing their characters in interviews, her TV Guide piece was predominately about her breasts. We get the feeling that the other cast-members — Fred Kwan (Tony Shaloub) and Tommy Webber (Daryl Mitchell) — are mostly just happy to be there as it beats collecting residuals and waiting for a call from their agent they know will never come.

Then something strange occurs. A race of aliens has intercepted broadcasts of the TV show Galaxy Quest all the way up in outer space. For years, they’ve looked to the show as “historical documents,” before finally landing on Earth and beaming the entire crew into space. Jason, Alexander, and the rest of the cast find themselves aboard a ship that’s been modeled after the one on which they spent hours filming. The alien leader — Mathesar (Enrico Colantoni), who, along with the rest of his breed aren’t much different from humans — informs the crew they’re under attack by a force of hideous alien creatures and need the brains and brawn of the Galaxy Quest team to save them.

This is such a golden concept for a satire I was petrified it would flop. That fear of mine was put to bed in less than 30 minutes.

Galaxy Quest deserves the warmth its received, both in the past and present. Starting with the cast, everyone not only nails their archetypes, but gets ample time to shine, as screenwriters David Howard and Robert Gordon (who would go on to pen Men in Black II) are democratic in the way they allow each character room to develop. I particularly enjoyed Weaver’s portrayal of DeMarco, whose character on the show’s usefulness boiled down to regurgitating lines spewed by the spaceship’s computer. When she finds herself doing it again, this time in a real ship, she claps back to the cast: “That’s my one job on the show!”

The only grating character is Sam Rockwell’s Guy Fleegman. Now the cast’s handler, he appeared on one episode of the series as “Crewman #6” and has what you could call “background actor syndrome:” the actor who felt he could’ve made it if given the proper chance. He spends most of the movie flexing his muscles and elbowing his way into being necessary. Rockwell would later master this character-type. Not quite here, but the writing gives him few opportunities to be as likable — or at least as human — as the others.

Special credit goes to Stan Winston, who designed the alien creatures with an artful, practical touch. More than convincing, they loan gravity to the juxtaposition of the corny, fictitious sci-fi world to which the Galaxy Quest crew are accustomed. The aliens are real, and they look real. This is contrary to the show, which, as Jason points out at one point, was all cardboard and backlots. More than just shrinking the aspect ratio when reverting back to scenes from the TV series, director Dean Parisot paid close attention to detail. Therein lies the very principle necessary to make a project like this succeed.

Finally, the most touching character is played by Justin Long, in his first film role. Playing a superfan of the series, he’s given the cold shoulder by a snippy Jason at the convention. He’s just another loser who has wasted healthy hours of sleep fussing about the logic and the scientific methods employed on the show. Later, however, he’s called upon by the cast who need his mastering of quantum theory in order to get them back to Earth safely. The day is saved not solely by the crew once again playing dress-up, but by the fans who made the show an enduring success in the first place.

Without great people behind it, there’d be no reason to talk about Galaxy Quest 22 years later. Without fans in the first place, there would be no Galaxy Quest.